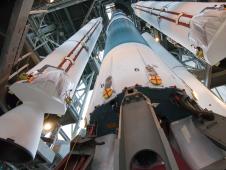 Image above: Solid-fueled boosters are prepared for attachment to the first stage of the Delta II rocket that will launch the GRAIL twin spacecraft. Photo credit: NASA/Jim Grossmann
› View Larger Image 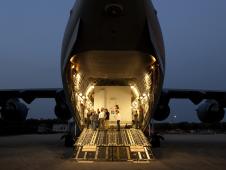 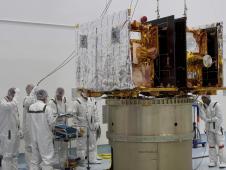 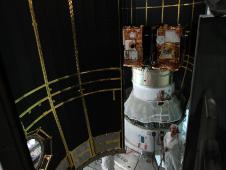 Circling the Earth at a distance of only 240,000 miles, the moon has captivated humanity's collective imagination since ancient times. Humans have studied the moon for hundreds of years -- first with telescopes, then with robotic probes, even sending twelve American astronauts to the lunar surface. But many mysteries remain.

The Gravity Recovery and Interior Laboratory mission, or GRAIL, features twin spacecraft embarking on a challenging mission to map the moon's gravity.

"GRAIL is a mission that will study the inside of the moon from crust to core," Zuber says.

The mission's two spacecraft will fly in formation above the lunar surface to measure the variations in gravity. The mission seeks to reveal clues about our moon's thermal history, and how the inner solar system's rocky planets developed.

GRAIL is set to depart from Space Launch Complex 17B at Cape Canaveral Air Force Station in Florida on Sept. 8 at 8:37 a.m. Prelaunch processing -- and the final countdown -- are managed by NASA's Launch Services Program (LSP) at nearby Kennedy Space Center.

"Our team, especially, gets excited whenever we leave Earth orbit, and going to the moon excites us and excites the public," says LSP's Tim Dunn, the NASA Launch Manager for GRAIL.

The two spacecraft -- called GRAIL-A and GRAIL-B -- are riding into space side-by-side aboard a powerful Delta II Heavy rocket built by United Launch Alliance. It's a rocket with an impressive reliability record.

"NASA has a terrific history with the Delta family of rockets," Dunn says. "If we just look at the Delta II rocket, which is the version of the vehicle that we fly today, NASA has a perfect launch record, 48 for 48."

The payload for NASA's most recent lunar mission, called LRO-LCROSS, weighed in at 6,600 pounds and was the size of a minivan. It launched in 2009 aboard a massive Atlas V rocket. Compare that to the GRAIL spacecraft, which together weigh only about 1,600 pounds. Each unit is about the size of a washing machine, designed to be compact and rugged.

"Whenever you have two spacecraft, it does increase the amount of work you have to do," explains Bruce Reid, the GRAIL mission manager for LSP.

"Both spacecraft have to go through environmental testing. And then, for instance, on launch day, we have two dedicated teams -- one to GRAIL-A and one to GRAIL-B. And they'll have to individually power up each spacecraft, and go through their health checks, and put the spacecraft in the proper configuration for launch."

After the climb to orbit, the GRAIL spacecraft will be released from the launch vehicle one at a time. Although most launches conclude with a single "spacecraft separation" -- the moment when launch and mission personnel cheer a successful deployment -- there will have to be two good separations for the GRAIL mission to begin.

"So we will definitely wait to celebrate until both spacecraft are safe and are on their translunar cruise to the moon," Reid says.

GRAIL's journey to the moon will take three-and-a-half months, a mission plan offering plenty of time for controllers to make sure the spacecraft are ready to get to work. The 42-day launch window opens Sept. 8, but the probes' arrival at the moon will remain fixed, regardless of the liftoff date. GRAIL-A will reach the moon on New Year's Eve of 2011; GRAIL-B will follow on New Year's Day of 2012.

Each spacecraft will have to execute a 38-minute lunar orbit insertion burn -- enough to slow the forward speed by 427 miles per hour. Once the spacecraft have slipped into lunar orbit, they'll spend the next five weeks reducing their orbit period. Then, the twin orbiters will be maneuvered into formation, kicking off the mission's three-month science phase.

During the next 82 days, the moon will rotate three times beneath the two GRAIL spacecraft as they calculate the gravity they encounter. Each 27-day rotation is called a "mapping cycle."

The GRAIL mission also marks the first time students have a dedicated camera on board a planetary spacecraft. The digital video imaging system, called MoonKAM, will offer middle-school students the chance to request photography of lunar targets for classroom study. The project is headed by Dr. Sally Ride, the first American woman to fly in space.

The path from the Earth to the moon has been well traveled in recent decades by pioneers like Surveyor, the Apollo astronauts, Clementine, Lunar Prospector and many more. Today, GRAIL is ready to take its place in this long line of lunar explorers.

"I'm going to be passing Complex 17 about 3:30 a.m. on my way to console," Dunn says about launch day. "And that hour of the morning, looking off to the east, seeing the rocket bathed in spotlights... It's an emotional time for all of us on the launch team."
Anna Heiney
NASA's John F. Kennedy Space Center
› Back To Top