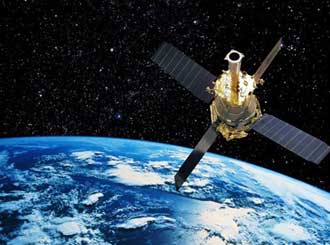 Artist concept of Gravity Probe B spacecraft in orbit around the Earth. Image Credit: Stanford

NASA's Gravity Probe B (GP-B) mission has confirmed two key predictions derived from Albert Einstein's general theory of relativity, which the spacecraft was designed to test.

The experiment, launched in 2004, used four ultra-precise gyroscopes to measure the hypothesized geodetic effect, the warping of space and time around a gravitational body, and frame-dragging, the amount a spinning object pulls space and time with it as it rotates.

GP-B determined both effects with unprecedented precision by pointing at a single star, IM Pegasi, while in a polar orbit around Earth. If gravity did not affect space and time, GP-B's gyroscopes would point in the same direction forever while in orbit. But in confirmation of Einstein's theories, the gyroscopes experienced measurable, minute changes in the direction of their spin, while Earth's gravity pulled at them.

The findings are online in the journal Physical Review Letters.

"Imagine the Earth as if it were immersed in honey. As the planet rotates, the honey around it would swirl, and it's the same with space and time," said Francis Everitt, GP-B principal investigator at Stanford University. "GP-B confirmed two of the most profound predictions of Einstein's universe, having far-reaching implications across astrophysics research. Likewise, the decades of technological innovation behind the mission will have a lasting legacy on Earth and in space."

GP-B is one of the longest running projects in NASA history, with agency involvement starting in the fall of 1963 with initial funding to develop a relativity gyroscope experiment. Subsequent decades of development led to groundbreaking technologies to control environmental disturbances on spacecraft, such as aerodynamic drag, magnetic fields and thermal variations. The mission's star tracker and gyroscopes were the most precise ever designed and produced.

GP-B completed its data collection operations and was decommissioned in December 2010.

"The mission results will have a long-term impact on the work of theoretical physicists," said Bill Danchi, senior astrophysicist and program scientist at NASA Headquarters in Washington. "Every future challenge to Einstein's theories of general relativity will have to seek more precise measurements than the remarkable work GP-B accomplished."

Innovations enabled by GP-B have been used in GPS technologies that allow airplanes to land unaided. Additional GP-B technologies were applied to NASA's Cosmic Background Explorer mission, which accurately determined the universe's background radiation. That measurement is the underpinning of the big-bang theory, and led to the Nobel Prize for NASA physicist John Mather.

The drag-free satellite concept pioneered by GP-B made a number of Earth-observing satellites possible, including NASA's Gravity Recovery and Climate Experiment and the European Space Agency's Gravity field and steady-state Ocean Circulation Explorer. These satellites provide the most precise measurements of the shape of the Earth, critical for precise navigation on land and sea, and understanding the relationship between ocean circulation and climate patterns.

GP-B also advanced the frontiers of knowledge and provided a practical training ground for 100 doctoral students and 15 master's degree candidates at universities across the United States. More than 350 undergraduates and more than four dozen high school students also worked on the project with leading scientists and aerospace engineers from industry and government. One undergraduate student who worked on GP-B became the first American woman in space, Sally Ride. Another was Eric Cornell who won the Nobel Prize in Physics in 2001.

"GP-B adds to the knowledge base on relativity in important ways and its positive impact will be felt in the careers of students whose educations were enriched by the project," said Ed Weiler, associate administrator for the Science Mission Directorate at NASA Headquarters.

NASA's Marshall Space Flight Center in Huntsville, Ala., managed the Gravity Probe-B program for the agency. Stanford University, NASA's prime contractor for the mission, conceived the experiment and was responsible for the design and integration of the science instrument, mission operations and data analysis. Lockheed Martin Corp. of Sunnyvale, CA designed, integrated and tested the space vehicle and some of its major payload components.

For more information about Gravity Probe B, visit: