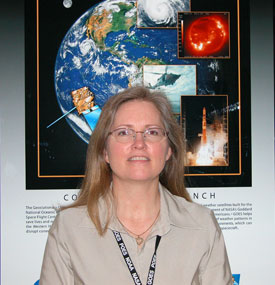 
Kathleen McIntyre is the Observatory Manager for the Geostationary Operational Environmental Satellites (GOES) Project at NASA's Goddard Space Flight Center (GSFC) in Greenbelt, Maryland. As Observatory Manager, she has responsibility for technical management of the GOES N, O, and P series of spacecraft.

Ms. McIntyre served in various management and System Engineering roles from 1993 to 2001. She was the NASA Resident Manager for the GOES N, O, and P Imager and Sounder Instruments in Ft. Wayne, Indiana. She also served as the Imager Instrument Manager and GOES Mission Systems Engineer for the GOES I-M series of spacecraft. In 1996, she authored a published paper on The Evolutionary Development of the GOES Imager.

Kathleen was the Launch Operations Manager for a privately funded orbital launch vehicle with EER Systems Corporation from 1991 through 1993. She led the design and construction of a privately funded launch complex at NASA's Wallops Flight Facility and the development of an automated Launch Control System.

Kathleen received a Bachelor of Science degree in Earth Sciences from the Pennsylvania State University and a Bachelor of Science degree in Mining Engineering from The University of Pittsburgh. Ms. McIntyre was awarded NASA's Exceptional Service Medal in recognition of her initiative and sustained performance in the development, test, launch, and on-orbit checkout of the Aura instruments.