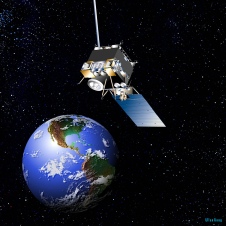 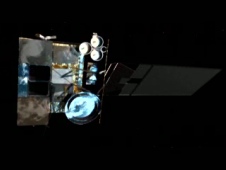 › View video
Video shows an artist's conception of GOES-13 orbiting the Earth. Credit: NASA The Geostationary Operational Environmental Satellite known as GOES-13 became the official GOES-EAST satellite on April 14, 2010. GOES-13 was moved from on-orbit storage and into active duty. It is perched 22,300 miles above the equator to spot potentially life-threatening weather, including tropical storm activity in the Atlantic Ocean and Gulf of Mexico.

"Just in time for the 2010 hurricane season, NOAA will have one of its newest, technologically advanced satellites closely tracking these storms – from when they develop to when they dissipate," said Mary Kicza, assistant administrator of the National Oceanic and Atmospheric Administration's (NOAA) Satellite and Information Service in Silver Spring, Md.

NASA's GOES Project, located at NASA's Goddard Space Flight Center in Greenbelt, Md., procures and manages the development and launch of the GOES series of satellites for NOAA on a cost-reimbursable basis. NASA's GOES Project also creates some of the GOES satellite images and GOES satellite imagery animations. NOAA manages the operational environmental satellite program and establishes requirements, provides all funding and distributes environmental satellite data for the United States.

"It is exciting to think that we are now putting into service the best satellites this country has to offer," said Andre' Dress, GOES N-P NASA Deputy Project Manager, at Goddard. "We are really looking forward to see the increase in performance over the older satellites and the improvements in weather prediction."

GOES-13 has now replaced GOES-12, which NOAA is shifting in orbit to provide coverage for South America, as part of the Global Earth Observing System of Systems, or GEOSS. GOES-11 continues to occupy the GOES-WEST position.

Initially known as the GOES-N satellite, it was renamed GOES-13 when it achieved geosynchronous orbit. It was launched from Cape Canaveral Air Force Station, Fla. at 6:11 p.m. EDT on May 24, 2006 aboard a Boeing Delta IV rocket.

GOES-13 is the first of three new NOAA geostationary environmental satellites. The other two in the new series are GOES-14, launched in June 2009 and now in orbital storage, and GOES-15, launched on March 4, 2010, and undergoing tests before completing its "check-out" phase, scheduled to be complete in August 2010.

Since the first GOES launch in 1974, these satellites have supplied the data critical for fast, accurate weather forecasts and warnings. The newer GOES series of satellites help relay distress signals from emergency beacons, and are equipped to monitor solar activity, which can impact billions of dollars worth of government and commercial assets in space and on the ground.

NOAA understands and predicts changes in the Earth’s environment, from the depths of the ocean to the surface of the sun, and conserves and manages our coastal and marine resources.