Up, Up and Away
Weather has had an influence on humans throughout time. But predicting weather thousands of years ago was based more on myths and folklore than actual atmospheric conditions.

Forecasts are accurate enough that we have no excuse for leaving our umbrellas at home or not taking cover when a storm front is predicted. Thanks to the collaborative effort between NASA and the National Oceanic and Atmospheric Administration (NOAA), we have up-to-the-minute information on weather around the planet.

NASA has developed and built satellites for NOAA in order to monitor the entire Earth. They're transmitting millions of global measurements to NOAA's command centers, helping scientists prepare international forecasts that could ultimately save lives.

The path from ancient forecasting (which viewed storms as bad omens from the gods) to state-of-the-art technology we now rely on has been long and bumpy.

Take, for example, Greek philosopher Aristotle, who wrote a philosophical thesis around 340 B.C. that speculated about the formation of rain, clouds, hail, wind, thunder, lightning and hurricanes. Although his four-volume text became the weather authority for almost 2000 years, many of his theories eventually were discarded as erroneous.

The importance of tools in forecasting weather was undeniable, but creation of the instruments needed for testing moisture, temperature and pressure of the atmosphere didn't come into existence until after the end of the Renaissance.

Leonardo da Vinci was noted to have built the first known instrument to measure the humidity of air or gas -- called a "hygrometer" -- around the 1400s.

The son of King Sejong the Great, who reigned the Choson Dynasty from 1418 to 1450, invented the first rain gauge while seeking ways to improve agricultural technology to provide enough food and clothing for his subjects. King Sejong supplied the instrument to every village, not only to measure rainfall but to measure the farmers' potential harvests in order to assess appropriate taxes. 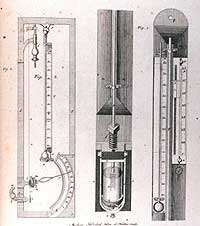 About 200 years later in Europe, Evangelista Torricelli discovered the principle of the barometer . Also known as "Torricelli's tube," the physicist and mathematician assisted Galileo Galilei with the use of mercury in his vacuum-tube experiments. Torricelli discovered the change of the height of the mercury from day to day was caused by changes in the atmospheric pressure. Simply: a "rising" barometer indicates increasing air pressure while a "falling" barometer indicates decreasing air pressure.

Except for the amount of sweat on the brow, there was no way to measure heat at the start of the 17th century. What we call thermometers today were originally called "thermoscopes." Although these tools were being developed by several people, Italian inventor Santorio Santorio was first to put a numerical scale on the instrument. Gabriel Fahrenheit invented the first mercury thermometer in 1724. 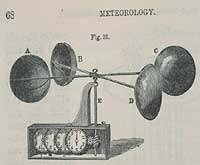 Irish researcher John T. R. Robinson later invented the hemispherical cup anemometer in 1846. It consisted of four small, hollow, metal hemispheres set so that they catch the wind and revolve around a vertical rod. As the cups rotated horizontally, a combination of wheels recorded the number of revolutions in a given time. A version of the anemometer is still used today.

"Modern" climate prediction dates back to the 1700s. One of the first climatologists was Thomas Jefferson, the third president of the United States. Using data collected by crude devices, he was able to draw and study weather maps.

Before 1800, clouds weren't thought to have a dynamic effect on weather and their importance wasn't understood. It was Englishman Luke Howard, later named the "godfather of clouds," who took amazingly accurate meteorological observations. Howard recorded three basic types of clouds, classifying them with Latin names. His pioneering work formed the basis of the 12 major cloud types.

In the 1860s, weather-observing stations began appearing across the globe, with the information being collected and compared, and forecasts offered.

Congress established a national weather organization in 1870 for forecasting storms on the Great Lakes and Atlantic seaboard. The savings in shipping losses exceeded the entire expense of the network. During this time, weather prediction was used more for military and commercial operations. But as the 20th century approached, the technologies grew with the ever-increasing need for more accurate forecasting. 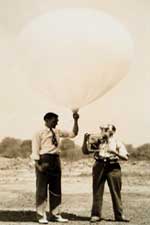 Observing atmospheric conditions at higher altitudes became possible in the 1920s with the invention of the "radiosonde," a small, lightweight box equipped with weather instruments and a radio transmitter. A hydrogen- or helium-filled balloon carried it high into the atmosphere. The readings of temperature, moisture, and pressure data were transmitted back to a ground station before the balloon burst. The data were processed and then made available for creating maps for weather prediction.

Radiosondes are still being launched from hundreds of ground stations world-wide. Accuracy of forecasting soared with the advent of computers and weather satellites. On April 1, 1960, NASA's polar-orbiting satellite TIROS-1 took the first picture of Earth from a weather satellite. In 1970, various federal weather and climate services were combined into the National Weather Service and placed under NOAA's umbrella.

Today, NASA/NOAA Earth-observing satellites are providing forecasters with almost immediate access to atmospheric events, changes and severe weather, even from the remotest areas of the planet.

NASA's launch of NOAA-N in May 2005 opens a new era of international cooperation with the European Organisation for the Exploitation of Meteorological Satellites (EUMETSAT) to collect and exchange meteorological information with other nations.

NASA's Goddard Space Flight Center in Greenbelt, Maryland is responsible for the construction, integration and verification testing of the spacecraft, instruments and ground equipment. NOAA is responsible for program requirements, funding and the on-orbit operation of the Polar Operational Environmental Satellites (POES).