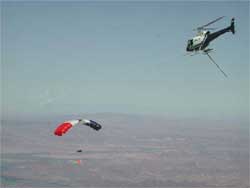 The solar particles are sealed inside the Genesis sample return capsule, a disk about the size of a truck tire, that will drift toward Earth's surface beneath a parachute.

In labs specially designed to measure small numbers of atoms, scientists will begin years of close examination of the particles in search of new information about how the Sun and its family of planets came into being.

The sample is composed of the invisible ions (atoms stripped of many of their electrons) that flow off the Sun -- making up what's called the "solar wind." The solar wind streams constantly throughout our solar system. Like water flowing around a stone in a river, the solar wind moves along the outside of the magnetic fields of Earth and other planets. Sometimes, we can see an effect produced by the solar wind in the form of aurora near the Earth's poles. The glowing curtains of light are the colorful result of these particles spiraling into Earth's atmosphere along the magnetic field lines that dip inward at the poles.

Scientists have long wanted to capture a sample of particles straight from the Sun. While the Sun is mostly made up of hydrogen and helium, there are small amounts of all other elements as well. The exact composition of the Sun is yet to be determined, as is an understanding of how that chemical makeup resulted in the diverse collection of planets and other bodies in the solar system.

For the Genesis scientists, it is crucial that the particles be pure and unaltered from any interaction with Earth's magnetic field. To obtain this pristine sample, a spacecraft had to be sent deep into space, far beyond the extensive magnetic environment of Earth.

NASA's Genesis, a robotic spacecraft, was launched in August 2001 from Cape Canaveral, Florida. It traveled to an area in space between Earth and the Sun where the gravity of the two bodies is balanced. There, it collected solar wind particles for more than two years from an area in space far from the interfering effects of any planet.

The particles were embedded in specially designed and manufactured, high-purity wafers of sapphire, silicon, diamond and other materials. Now this pure sample of solar particles is being brought to Earth.