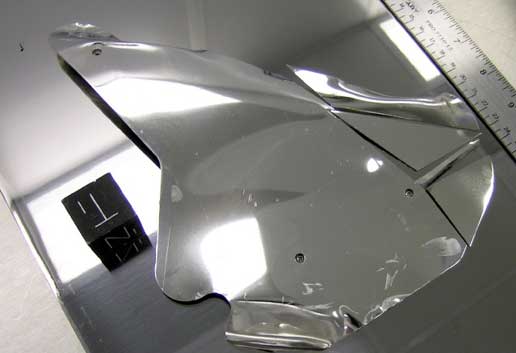 JSC2005-E-00963 (4 January 2005) --- Scientists at NASA's Johnson Space Center in Houston have shipped a piece of the Genesis polished aluminum collector, pictured prior to shipment, to researchers at Washington University in St. Louis, marking the first distribution of a Genesis scientific sample from JSC since the science canister arrived there Oct. 4, 2004. The sample, the first to be allocated for Genesis early science analysis, may hold important evidence about the overall composition of the sun. Several important Genesis science objectives will be investigated as part of the Early Science Return, including studies of noble gas isotopes in bulk solar wind and nitrogen isotopes. Curators of the solar wind samples at JSC sent the sample to Genesis science team investigators and Washington University faculty members Charles Hohenberg and Alex Meshik. During the mission, the collector arrays on the Genesis spacecraft were exposed to the solar wind for 29 months.