A Little Glitz Goes a Long Way for NASA's Genesis 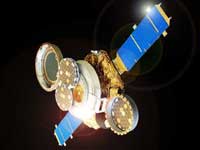 Editor's note: This feature story was written before Genesis' Sept. 8 landing, during which the drogue parachute and parafoil did not deploy. For the latest on Genesis, click on the
"+ Genesis Main" link to the left.


It seems everyone benefits from a little "bling bling" now and then. Hollywood icons use six-carat jewels to decorate themselves; eastern ayurvedic doctors use precious gems to make medicine; and scientists on NASA's Genesis mission, due to return Sept. 8, use sapphire, silicon, gold and diamond to collect raw solar wind particles in outer space.

"The exciting thing about Genesis is that the data it returns will be important for understanding how our solar nebula developed into a planetary system," said Genesis Project Scientist Dr. Amy Jurewicz at NASA's Jet Propulsion Laboratory, Pasadena, Calif. "Genesis data can bridge much of this gap because independent evidence suggests that the outer portion of the Sun, what we are sampling, hasn't changed in the past 4.5 billion years."

In the Brilliant Beginning
To successfully capture raw solar wind, Genesis flew a million miles away, outside Earth's magnetic field, which alters the particles, and hovered in its own orbit for 29 months. Scientists grappled with several challenges while pondering ways to keep the samples pristine during and after collection. First off, they had to find a proper way to collect and transport the samples. The largest collector consists of five bicycle-tire-sized collector arrays, each loaded with 54 or 55 hexagonal wafers measuring about 4 inches (10 centimeters) in diameter. These wafers consist of 15 different high-purity materials including aluminum, sapphire, silicon, germanium, gold and diamond-like amorphous carbon -- all chosen for their durability, purity, cleanliness, retentiveness and ease of analysis. 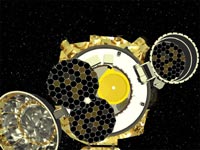 "The materials we used in the Genesis collector arrays had to be physically strong enough to be launched without breaking; retain the sample while being heated by the Sun during collection; and be pure enough that we could analyze the solar wind elements after Earth-return," Jurewicz said.

Each collector array was assigned to catch various types of solar wind. Genesis's goal was to collect billions of atoms of solar particles heavier than hydrogen, equivalent to "a few grains of salt," according to Genesis Principal Investigator Dr. Donald Burnett of the California Institute of Technology.

Since the solar wind was implanted near the surface of each wafer, the ability to differentiate the implanted solar wind from impurities within the wafer itself, as well as surface contamination from handling and terrestrial transport, was an important science issue.

Once the solar wind particles were collected, the wafers had to be able to retain them while warming under the Sun's rays. Each type of wafer will retain different solar wind elements. Sapphire was used because it can retain sodium under these conditions. Silicon, which comprises approximately half of the materials used in the collector arrays, does not retain sodium but does retain many other elements, including the important rock-forming element magnesium.

Geometry was also used to enhance researchers' ability to analyze the sample. By making some of the collector materials thin and mounting them on a rigid, inert structure (e.g. silicon on sapphire), the effects of impurities in the collector material were minimized by only analyzing the thin layer.

The Treasured Return
Genesis completed the science-collection phase of the mission in April 2004, securing the collector wafers and their precious cargo in its sample return capsule for the five-month trip back to Earth. It will be NASA's first sample return mission since Apollo 17 in 1972.

Once positioned on the side of Earth opposite the Sun, the spacecraft will separate from the capsule. A drogue parachute will slow the capsule during its fall through Earth's atmosphere. Flying high above the Utah desert, the capsule will then deploy a parafoil -- much like that of a skydiver -- and coast down over the Utah Test and Training Range until a helicopter hooks the parafoil, capturing it in midair. The solar samples will then be taken to NASA's Johnson Space Center for analysis and later made available for analysis by other laboratories the world over.

"I believe that everyone - NASA, the general public and even scientists outside of the planetary science community - will be amazed at how much this one mission will teach us," Jurewicz said.