Genesis Spacecraft Returns to Earth Sept. 2004
Editor's note: This feature story was written before Genesis' Sept. 8 landing, during which the drogue parachute and parafoil did not deploy. For the latest on Genesis, click on the "+Genesis Main" link to the left.

Making a dramatic entrance on September 8, 2004, the Genesis Sample Return Capsule (SRC) returns to Earth in an astonishing mid-air capture. Like an action-packed scene from a James Bond movie, the SRC recovery inspires the same edge-of-your-seat suspense. Professional stunt pilots flying helicopters with special retrieval equipment swoop in and swipe the solar wind samples Genesis has collected during its two and half-year solar bath. 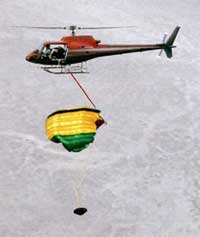 In planning the mission, Genesis scientists and engineers faced an enormous challenge: how to recover these solar specks safely? And, what is the likelihood that the minuscule contents -- which amount in mass to a few grains of sand -- return undamaged? To insure the precious cargo returns to Earth undisturbed, NASA has coordinated a flying trapeze-inspired, mid-air recovery of the SRC over an expansive stretch of desert in Utah.

Genesis Project Manager Don Sweetnam describes the capture as one of the most challenging parts of the mission. "At the end we must get the spacecraft to return to a tiny spot in the Utah desert and then snag it with a helicopter before it hits the ground." While action films rely on special effects, stunt experts and rehearsals to achieve success, the Genesis team has carefully designed, coordinated, and tested the recovery process in order to minimize the risk involved in retrieving the solar wind samples unscathed and uncontaminated.

The recovery process begins in April 2004 when the microscopic ions and mission's payload are carefully stowed away in the cylindrical-shaped SRC container providing protective storage in transit during the 5-month journey back to Earth. Then, according to plan, on the morning of September 8, 2004, several hours before entering Earth's atmosphere, the SRC containing the payload splits away from the rest of the spacecraft. The remaining portion of the spacecraft will be rerouted to a long-term orbit around the Sun, while the SRC will coast toward its mid-air retrieval site above the Utah Testing and Training Range (UTTR), a U.S. Air Force and Army facility.

Nearly 19 miles above the ground, the SRC begins to decelerate when the lid of the re-entry capsule ejects and releases the first parachute. This small drogue chute helps to break the speed and stabilize the 500-pound capsule. Moments later, when the SRC is just one and half miles above ground, a larger rectangular-shaped parafoil -- much like a hang glider -- allows the capsule to gently spiral downward at an approximate speed of 10 miles per hour.

Meanwhile, two chase helicopters (one lead and one backup) outfitted with specially designed retrieval equipment, move in for the mid-air capture. The lead helicopter flies into the parafoil's glide path, hooks and collapses the chute, and gently lowers the SRC into a sealed container; all in an effort to safely transport the capsule to contamination-controlled laboratory tents, without disturbing the solar samples inside. If weather should be uncooperative, the Genesis team has developed a back-up plan. The spacecraft may resort to a holding pattern: a six-month parking orbit.

Returned samples will be carefully extracted and preserved so that they may be studied for many years to come. Scientists believe the sun contains over 99% of the matter comprising the solar system. Although the Sun's chemical make-up is mostly hydrogen and helium, studies of solar wind collected during NASA's Apollo missions indicate trace amounts of over 60 other elements. The Genesis mission hopes to build on this heritage by determining the exact abundances of the Sun's various chemical components.

The scientific theory which gave rise to the Genesis mission suggests that by retrieving and studying solar wind particles -- believed to resemble the interstellar dust, gas, and ice from which all bodies in our solar system evolved -- scientists may find illuminating clues yielding greater insight into planetary formation and diversity. "The Genesis mission is a crucial step in the future of planetary exploration," Principal Investigator Don Burnett explains. "By bringing back solar matter that we can analyze in laboratories on Earth, we will be providing the fundamental data to understand how planets formed in the early history of our solar system."

NASA's Genesis mission
› Back To Top