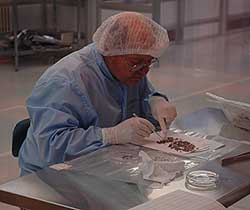 Ever since astronauts returned from another world, scientists have been mystified by some of the moon rocks they brought back. Now one of the mysteries has been solved.

"We learned a great deal about the sun by going to the moon," said Don Burnett, Genesis principal investigator at California Institute of Technology, Pasadena, Calif. "Now, with our Genesis data, we are turning the tables, using the solar wind to better understand lunar processes."

Ansgar Grimberg from ETH Institute of Astronomy in Zurich and coworkers analyzed the composition of neon in a metallic glass exposed on NASA's Genesis mission. The team's findings are reported in a paper published in the Nov. 17 issue of the journal Science. Burnett is a co-author of the paper.

One of the stated goals of the Apollo missions was to understand the history of the sun in time. With no atmosphere or magnetic field to interfere, particles from the sun hit and imbedded themselves into the lunar surface for almost four billion years. This goal was not fully met due to the complexity of lunar materials and processes and to the limited duration of the Apollo field operations.

Many of the lunar sample studies were of the relative amounts of the isotopes of different solar gas elements. Many elements have atoms of different mass. For example, neon has a light isotope (Ne20) and a heavy isotope (Ne22).

One of the major surprises from study of the record of neon from the sun in lunar soil samples was evidence for two solar gas components with distinct isotopic compositions. One has been identified as solar wind, the other as higher-energy solar energetic particles because it was found at greater depths in the mineral grains. But the latter has long been puzzling to scientists because its relative amounts were much too large compared with present-day solar fluxes, suggesting very high solar activity in the past.

To investigate this problem, a bulk metallic glass specially synthesized by Charles Hays at NASA's Jet Propulsion Laboratory, Pasadena, Calif., was exposed to the solar wind for 27 months on NASA's Genesis mission. The advantage of this material is that when it is returned to Earth and analyzed in a laboratory, it can be uniformly etched with nitric acid vapor allowing the depth distribution of the solar wind neon to be measured by stepwise release.

The first experiments at the ETH Institute in Zurich revealed surprising results. Neon isotopic variations were not expected until relatively large depths when the solar energetic particle regime would be reached, but instead they were observed immediately. As etching proceeded, the results were almost identical to those found in many lunar samples, with two major differences.

First, Genesis samples do not contain detectable amounts of neon produced by galactic cosmic ray particles because no appreciable concentrations of such particles accumulated in 27 months. Thus they allowed scientists to analyze pure solar wind samples.

Second, the first gas extractions from the bulk metallic glass showed neon isotopic compositions never seen in lunar sample data. This finding suggests that space weathering and erosion over time reduced the levels of neon on the surface of all lunar samples, which in turn led to a misinterpretation of the lunar data.

The researchers conclude that the Apollo solar energetic particles do not exist. Both the Genesis and Apollo isotopic variations can be quantitatively explained by the fact that the Ne22 isotope is implanted deeper than the Ne20 isotope. Moreover, these findings indicate that there is no evidence for enhanced fluxes of high-energy solar particles billions of years ago compared to today.
› Back To Top