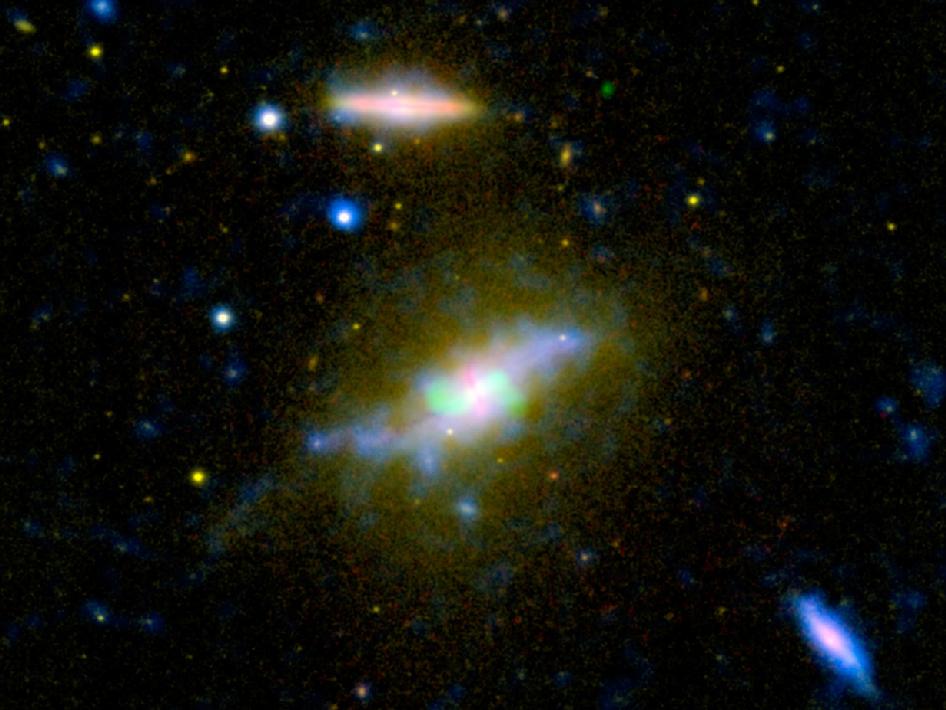 The Beginning of the End of Star Formation

Time is running out for the galaxy NGC 3801, seen in this composite image combining light from across the spectrum, ranging from ultraviolet to radio. NASA's Galaxy Evolution Explorer and other instruments have helped catch the galaxy NGC 3801 in the act of destroying its cold, gaseous fuel for new stars. Astronomers believe this marks the beginning of its transition from a vigorous spiral galaxy to a quiescent elliptical galaxy whose star-forming days are long past.

Visible light from the Sloan Digital Sky Survey is seen in yellow shining from all of the galaxy's stars. Notice that NGC 3801 is starting to possess a broadly elliptical shape, the characteristic shape a galaxy assumes after forming from a merger of spiral galaxies. Some star formation is still taking place in NGC 3801, as shown in the ultraviolet by the Galaxy Evolution Explorer (colored blue), and in the dusty disk revealed in infrared light by NASA's Spitzer Space Telescope (red).

According to theory, that lingering star formation will soon be quenched by shock waves from two powerful jets shooting out of NGC 3801's central giant black hole. Radio emissions from those jets appear in this image in green. Like a cosmic leaf blower, the jets' expanding shock waves will blast away the remaining cool star-making gas in NGC 3801. The galaxy will become "red and dead," as astronomers say, full of old, red stars and lacking in any new stellar younglings.

Near-ultraviolet light from the Galaxy Evolution explorer at a wavelength of 230 nanometers is rendered in blue, while visible light at 469 nanometers from Sloan is displayed in yellow. Infrared light at 8 microns from Spitzer is red, and radio emission at 20 centimeters from NRAO’s Very Large Array is overlaid in green.