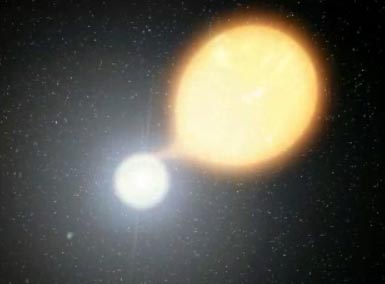 This animation shows an artist's concept of Z Camelopardalis (Z Cam), a stellar system featuring a collapsed, dead star, or white dwarf, and a companion star. The white dwarf, the bright white object within the disk on the left, sucks matter from its more sedate companion star, on the right. The stolen material forms a rotating disk of gas and dust around the white dwarf. After a certain amount of material accumulates, the star erupts in a huge nova explosion, known as a "classical nova." After that explosion, the star continues to flare up with smaller bursts, which is why Z Cam is known today as a recurrent dwarf Nova. The remnants of the classical nova explosion form a ghostly shell, which provides lingering evidence of the violent outburst. The animation ends with an image taken by NASA's Galaxy Evolution Explorer on Jan. 25, 2004, when the star system was undergoing a period of relative calm.

Astronomers divide exploding binary star systems into two classes – recurrent dwarf novae, which erupt in smaller, "hiccup-like" blasts, and classical novae, which undergo huge explosions. A link between the two types of novae had been predicted, but the observations from the Galaxy Evolution Explorer bolster the theory that some binary systems undergo both types of explosions.