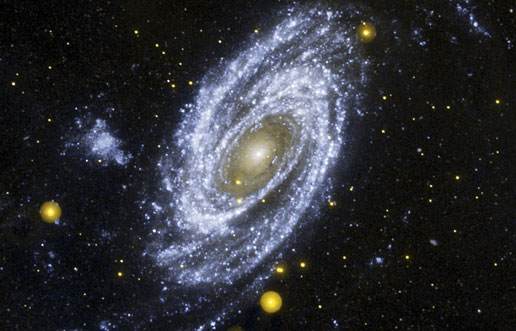 NASA's Galaxy Evolution Explorer is celebrating its fourth year in space with some of M81's "hottest" stars.

In a new ultraviolet image, the magnificent M81 spiral galaxy is shown at the center. The orbiting observatory spies the galaxy's "sizzling young starlets" as wisps of bluish-white swirling around a central golden glow. The tints of gold at M81's center come from a "senior citizen" population of smoldering stars.

"This is a spectacular view of M81," says Dr. John Huchra, of the Harvard Smithsonian Center for Astrophysics, Cambridge, Mass. "When we proposed to observe this galaxy with Galex we hoped to see globular clusters, open clusters, and young stars -- this view is everything that we were hoping for."

The image is one of thousands gathered so far by Galex, which launched April 28, 2003. This mission uses ultraviolet wavelengths to measure the history of star formation 80 percent of the way back to the Big Bang.

The large fluffy bluish-white material to the left of M81 is a neighboring galaxy called Holmberg IX. This galaxy is practically invisible to the naked human eye. However, it is illuminated brilliantly in Galex's wide ultraviolet eyes. Its ultraviolet colors show that it is actively forming young stars. The bluish-white fuzz in the space surrounding M81 and Holmberg IX is new star formation triggered by gravitational interactions between the two galaxies. Huchra notes that the active star formation in Holmberg IX is a surprise, and says that more research needs to be done in light of the new findings from Galex.

"Some astronomers suspect that the galaxy Holmberg IX is the result of a galactic interaction between M81 and another neighboring galaxy M82," says Huchra. "This particular galaxy is especially important because there are a lot of galaxies like Holmberg IX around our Milky Way galaxy. By understanding how Holmberg IX came to be, we hope to understand how all the little galaxies surrounding the Milky Way developed."

"Four years after Galex's launch, the spacecraft is performing magnificently. The mission results have been simply amazing as it helps us to unlock the secrets of galaxies, the building blocks of our universe," says Kerry Erickson, Galex project manager.

M81 and Holberg IX are located approximately 12 million light-years away in the northern constellation Ursa Major. In addition to leading the Galex observations of M81, Huchra and his team also took observations of the region with NASA's Spitzer and Hubble space telescopes. By combining all these views of M81, Huchra hopes to gain a better understanding about how M81 has developed into the spiral galaxy we see today.