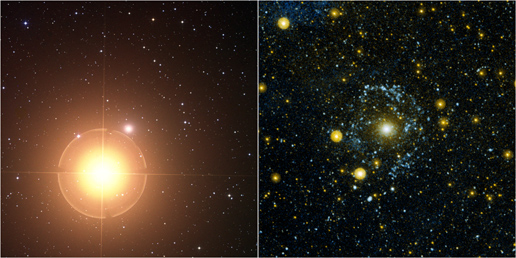 The "Ghost of Mirach" galaxy is shown in visible light on the left, and in ultraviolet as seen by NASA's Galaxy Evolution Explorer on the right. The fields of view are identical in both pictures, with the Ghost of Mirach -- a galaxy called NGC 404 -- seen as the whitish spot in the center of the images. Mirach is a red giant star that looms large in visible light. Because NGC 404 is lost in the glare of this star, it was nicknamed the Ghost of Mirach.

But when the galaxy is viewed in ultraviolet light, it comes to "life," revealing a never-before-seen ring. This ring, seen in blue in the picture on the right, contains new stars -- a surprise considering that the galaxy was previously thought to be, essentially, dead.

The field of view spans 55,000 light years across. The Ghost of Mirach is located 11 million light-years from Earth. The star Mirach is very close in comparison -- it is only 200 light-years away and is visible with the naked eye.

The visible data come from the Digitized Sky Survey of the Space Telescope Science Institute in Baltimore, Md.