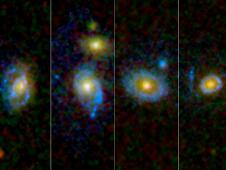 Astronomers have found unexpected rings and arcs of ultraviolet light around a selection of galaxies, four of which are shown here as viewed by NASA's and the European Space Agency's Hubble Space Telescope. Image credit: NASA/ESA /JPL-Caltech/STScI/UCLA
› Full image and caption

Astronomers have found mysterious, giant loops of ultraviolet light in aged, massive galaxies, which seem to have a second lease on life. Somehow these "over-the-hill galaxies" have been infused with fresh gas to form new stars that power these truly gargantuan rings, some of which could encircle several Milky Way galaxies.

The discovery of these rings implies that bloated galaxies presumed "dead" and devoid of star-making can be reignited with star birth, and that galaxy evolution does not proceed straight from the cradle to the grave.

"In a galaxy's lifetime, it must make the transition from an active, star-forming galaxy to a quiescent galaxy that does not form stars," said Samir Salim, lead author of a recent study and a research scientist in the department of astronomy at Indiana University, Bloomington. "But it is possible this process goes the other way, too, and that old galaxies can be rejuvenated."

The findings come courtesy of the combined power of two orbiting observatories, NASA's Galaxy Evolution Explorer and Hubble Space Telescope. First, the Galaxy Evolution Explorer surveyed a vast region of the sky in ultraviolet light. The satellite picked out 30 elliptical and lens-shaped "early" galaxies with puzzlingly strong ultraviolet emissions but no signs of visible star formation. Early-type galaxies, so the scientists' thinking goes, have already made their stars and now lack the cold gas necessary to build new ones.

The Galaxy Evolution Explorer could not discern the fine details of these large, rounded galaxies gleaming in the ultraviolet, so to get a closer look, researchers turned to the Hubble Space Telescope. What they saw shocked them: three-quarters of the galaxies were spanned by great, shining rings of ultraviolet light, with some ripples stretching 250,000 light-years. A few galaxies even had spiral-shaped ultraviolet features.

"We haven't seen anything quite like these rings before," said Michael Rich, co-author of the paper and a research astronomer at UCLA. "These beautiful and very unusual objects might be telling us something very important about the evolution of galaxies."

Colors of the Ages

Astronomers can tell a galaxy's approximate age just by the color of its collective starlight. Lively, young galaxies look bluish to our eyes due to the energetic starlight of their new, massive stars. Elderly galaxies instead glow in the reddish hues of their ancient stars, appearing "old, red and dead," as astronomers bluntly say. Gauging by the redness of their constituent stars, the galaxies seen by the Galaxy Evolution Explorer and Hubble are geezers, with most stars around 10 billion years old.

But relying on the spectrum of light visible to the human eye can be deceiving, as some of us have found out after spending a day under the sun's invisible ultraviolet rays and getting a sunburn. Sure enough, when viewed in the ultraviolet part of the spectrum, these galaxies clearly have more going on than meets the eye.

Some ultraviolet starlight in a few of the observed galaxies might just be left over from an initial burst of star formation. But in most cases, new episodes of star birth must be behind the resplendent rings, meaning that fresh gas has somehow been introduced to these apparently ancient galaxies. Other telltale signs of ongoing star formation, such as blazing hydrogen gas clouds, might be on the scene as well, but have so far escaped detection.

The Lord of the Ultraviolet Rings

Just where the gas for this galactic resurrection came from and how it has created rings remains somewhat perplexing. A merging with a smaller galaxy would bring in fresh gas to spawn hordes of new stars, and could in rare instances give rise to the ring structures as well.

But the researchers have their doubts about this origin scenario. "To create a density shock wave that forms rings like those we've seen, a small galaxy has to hit a larger galaxy pretty much straight in the center," said Salim. "You have to have a dead-on collision, and that's very uncommon."

Rather, the rejuvenating spark more likely came from a gradual sopping-up of the gas in the so-called intergalactic medium, the thin soup of material between galaxies. This external gas could generate these rings, especially in the presence of bar-like structures that span some galaxies' centers.

Ultimately, more observations will be needed to show how these galaxies began growing younger and lit up with humongous halos. Salim and Rich plan to search for more evidence of bars, as well as faint structures that might be the remnants of stellar blooms that occurred in the galaxies' pasts. Rather like recurring seasons, it may be that galaxies stirred from winter can breed stars again and then bask in another vibrant, ultraviolet-soaked summer.

The study detailing the findings appeared in the April 21 issue of the Astrophysical Journal.

The California Institute of Technology in Pasadena leads the Galaxy Evolution Explorer mission and is responsible for science operations and data analysis. NASA's Jet Propulsion Laboratory, also in Pasadena, manages the mission and built the science instrument. The mission was developed under NASA's Explorers Program managed by the Goddard Space Flight Center, Greenbelt, Md. Researchers sponsored by Yonsei University in South Korea and the Centre National d'Etudes Spatiales (CNES) in France collaborated on this mission.

Graphics and additional information about the Galaxy Evolution Explorer are online at http://www.nasa.gov/galex/ and http://www.galex.caltech.edu.

Written by By Adam Hadhazy