Portrait of a Galaxy's Life 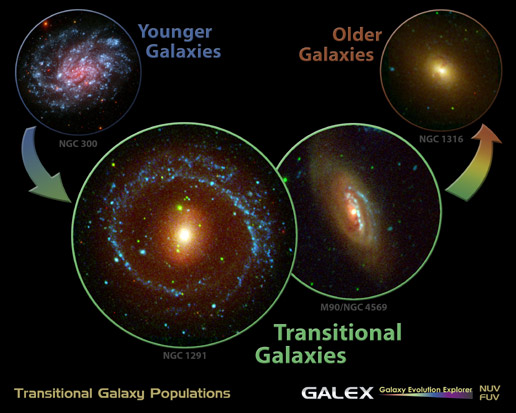 The galaxy on the left is NGC 300, a spiral located about seven million light-years away in the constellation Sculptor. Younger galaxies like this one tend to form more stars, and since new stars give off more ultraviolet and blue light, the galaxies appear blue.

The galaxy on the right is NGC 1316, located about 62 million light-years away in the constellation Fornax. It is an older elliptical. Older stars emit more red light, so this galaxy appears red.

The galaxies in the middle of the diagram represent the teenagers, which are on their way from becoming blue to red. The relatively small patches of ultraviolet light in these transitional galaxies indicate that star formation is winding down. The galaxy at center left is NGC 4569, located about four million light-years away in the constellation Virgo. The galaxy at center right is NGC 1291, located about 33 million light-years away in the constellation Eridanus.

Before the Galaxy Evolution Explorer launched more than four years ago, there weren't a lot of examples of transitional galaxies, which made it difficult to demonstrate that galaxies mature from blue to red. The Galaxy Evolution Explorer allowed astronomers to find good examples of these elusive teenagers through its extensive catalogue of tens of thousands of galaxies photographed in ultraviolet light.