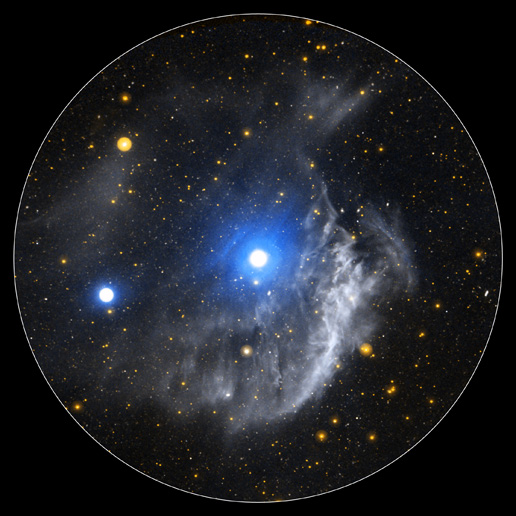 The unfortunate name of "planetary nebula" for this class of celestial object is a historical legacy credited to William Herschel during the 18th century -- a time when telescopes where small and objects like these, at least the central region, looked very similar to gas-giant planets such as Saturn and Jupiter. In fact, NGC 3242 has no relation to Jupiter or any other planet.

Telescopes and their detectors have dramatically improved over the past few centuries. Our understanding of what planetary nebulae truly are has improved accordingly.

When stars with a mass similar to our sun approach the end of their lives by exhausting supplies of hydrogen and helium fuel in their cores, they swell up into cool red-giant stars. In a last gasp before death, they expel the layers of gas in their outer atmosphere. This exposes the core of the dying star, a dense hot ball of carbon and oxygen called a white dwarf. The white dwarf is so hot that it shines very brightly in the ultraviolet. The ultraviolet light from the white dwarf, in turn, ionizes the gaseous material expelled by the star causing it to glow. A planetary nebula is really the death of a low-mass star.

Although low-mass stars like our sun live for billions of years, planetary nebulae only last for about ten thousand years. As the central white dwarf quickly cools and the ultraviolet light dwindles, the surrounding gas also cools and fades.

In this image of NGC 3242 from the Galaxy Evolution Explorer, the extended region around the planetary nebula is shown in dramatic detail. The small circular white and blue area at the center of the image is the well-known portion of the famous planetary nebula. The precise origin and composition of the extended wispy white features is not known for certain. It is most likely material ejected during the star's red-giant phase before the white dwarf was exposed. However, it may be possible that the extended material is simply interstellar gas that, by coincidence, is located close enough to the white dwarf to be energized by it, and induced to glow with ultraviolet light.