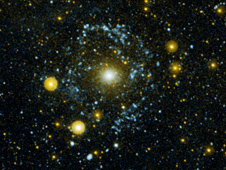 The "Ghost of Mirach" galaxy as seen in the ultraviolet. Image credit: NASA/JPL-Caltech
›  See side-by-side comparison of visible and ultraviolet light
NASA's Galaxy Evolution Explorer has lifted the veil off a ghost known to haunt the local universe, providing new insight into the formation and evolution of galaxies.

The eerie creature, called NGC 404, is a type of galaxy known as "lenticular." Lenticular galaxies are disk-shaped, with little ongoing star formation and no spiral arms. NGC 404 is the nearest example of a lenticular galaxy, and therefore of great interest. But it lies hidden in the glare from a red giant star called Mirach. For this reason, NGC 404 became known to astronomers as the "Ghost of Mirach."

When the Galaxy Evolution Explorer spied the galaxy in ultraviolet light, a spooky ring materialized.

"We thought this celestial ghost was essentially dead, but we've been able to show that it has an extended ring of new stars. The galaxy has a hybrid character in which the well-known, very old stellar population tells only part of the story," said David Thilker of Johns Hopkins University in Baltimore. "It's like the living dead."

Thilker and members of the Galaxy Evolution Explorer team spotted the Ghost of Mirach in images taken during the space telescope's all-sky survey. The Galaxy Evolution Explorer is a relatively low-cost NASA mission, launched in 2003, with an ambitious charge to survey the entire visible sky in ultraviolet light, a job never before accomplished. Because Earth's atmosphere absorbs ultraviolet photons -- a good thing for us living creatures who are susceptible to the damaging light -- ultraviolet telescopes must operate from space.

The first images of the Ghost of Mirach taken by the Galaxy Evolution Explorer hinted at a surrounding ultraviolet-bright extended structure. Subsequent, longer exposure observations indeed show that the lenticular galaxy is surrounded by a clumpy, never-before-seen ring of stars.

What is this mysterious ultraviolet ring doing around an otherwise nondescript lenticular galaxy? As it turns out, previous imaging with the National Science Foundation's Very Large Array radio telescope in New Mexico had discovered a gaseous ring of hydrogen that matches the ultraviolet ring observed by the Galaxy Evolution Explorer. The authors of this Very Large Array study attributed the gas ring to a violent collision between NGC 404 and a small neighboring galaxy 900 million years ago.

The ultraviolet observations demonstrate that, when the hydrogen from the collision settled into the plane of the lenticular galaxy, stars began to form in a ghostly ring. Young, relatively hot stars forming in stellar clusters sprinkled throughout NGC 404's ring give off the ultraviolet light that the Galaxy Evolution Explorer was able to see.

"Before the Galaxy Evolution Explorer image, NGC 404 was thought to contain only very old and evolved red stars distributed in a smooth elliptical shape, suggesting a galaxy well into its old age and no longer evolving significantly," said Mark Seibert of the Observatories of the Carnegie Institution of Washington in Pasadena, Calif. "Now we see it has come back to life, to grow once again."

"The Ghost of Mirach has been lucky enough to get a new lease on life through the rejuvenating, chance merger with its dwarf companion," added Thilker.

The findings indicate that the evolution of lenticular galaxies might not yet be complete. They may, in fact, continue to form stars in a slow, piecemeal fashion as they suck the raw, gaseous material for stars from small, neighboring galaxies. It seems the Ghost of Mirach might act more like a vampire than a ghost.

Caltech leads the Galaxy Evolution Explorer mission and is responsible for science operations and data analysis. NASA's Jet Propulsion Laboratory in Pasadena, Calif., manages the mission and built the science instrument. The mission was developed under NASA's Explorers Program managed by the Goddard Space Flight Center, Greenbelt, Md. Researchers sponsored by Yonsei University in South Korea and the Centre National d'Etudes Spatiales (CNES) in France collaborated on this mission.

Graphics and additional information about the Galaxy Evolution Explorer is online at http://www.nasa.gov/galex/ and http://www.galex.caltech.edu . Media contact: Whitney Clavin/JPL 818-354-4673
› Back To Top