Watching Galaxies Grow Old Gracefully
In the early 1900s, Edwin Hubble made the startling discovery that our Milky Way galaxy is not alone. It is just one of many galaxies, or "island universes," as Hubble dubbed them, swimming in the sea of space.

Now, a century later, NASA's Galaxy Evolution Explorer is helping piece together the evolution of these cosmic species. Since its launch in 2003, the mission has surveyed tens of thousands of galaxies in ultraviolet light across nine billion years of time. The results provide new, comprehensive evidence for the "nurture" theory of galaxy evolution, which holds that the galaxies first described by Hubble – the elegant spirals and blob-like ellipticals -- are evolutionarily linked. 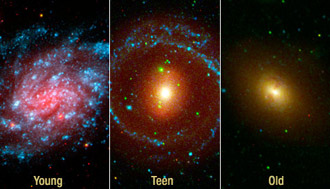 According to this "nurture" theory, a typical young galaxy begins life as a spiral that is actively churning out stars. Over time, the spiral might merge with another spiral or perhaps an irregular-shaped galaxy, before kicking out a few more bursts of newly minted stars. Eventually, the galaxy slows down its production of stars and settles into later life as an elliptical.

"Our data confirm that all galaxies begin life forming stars," said Chris Martin, the principal investigator for the Galaxy Evolution Explorer at the California Institute of Technology in Pasadena, Calif. "Then through a combination of mergers, fuel exhaustion and perhaps suppression by black holes, the galaxies eventually stop producing stars."

When astronomers talk about galaxies today, they tend to refer to them by their color, either blue or red, instead of by their shape. Most blue galaxies are smaller spirals or irregulars, and most red galaxies are larger ellipticals, though there are some exceptions.

Why color-code the galaxies? Their color indicates how actively they are making new stars. Younger stars shine in ultraviolet or blue light, so galaxies that appear blue are busily producing stars. Older stars emit infrared or red light, so galaxies that look red have shut down their star-making factories. Roughly half of all galaxies are blue and half are red.

Scientists have long postulated that blue galaxies grow up to become red. They proposed that something happens to the blue galaxies to cause them to run out of star-making material, or gas, and mature into the passive red ones. For this "nurture" theory to be true, there should be a population of "teenage" galaxies in the process of transitioning from blue to red, or young to old. But such a cosmic metamorphosis should take billions of years. How can astronomers, with a significantly shorter lifespan, study a process that takes that long?

One solution is to look at lots and lots of galaxies. Imagine a hypothetical alien trying to figure out how and if humans age from only a handful of snapshots showing people of different ages. The aliens might assume that little people grow into big ones, but they could better piece together the life of a typical human if they could look through boxes and boxes of photographs.

The Galaxy Evolution Explorer was designed to provide astronomers with just such a massive portfolio of galaxies. Its troves of data have allowed scientists to find a significant number of teenage galaxies – and thus proof that youthful spiral, or blue, galaxies will eventually grow up to become the elderly elliptical, or red, galaxies.

"The nurture theory of galaxy evolution predicted that there would be galaxies in transition," said Martin. "Finding these galaxies required ultraviolet light, because they really stand out at this wavelength. And because they are rare, we had to look at many. The Galaxy Evolution Explorer allowed us to do this."

Visible-light data from the Sloan Digital Sky Survey also helped to establish the age of the teenage galaxies and the rates at which they are running out of star-making fuel. These findings suggest that some of the young galaxies are ripening into old age quickly, while others are leisurely strolling into their golden years.

Evidence for the "nurture" theory of galaxy evolution can be found in a report in the Astrophysical Journal. Martin is the lead author.

Graphics and additional information about the Galaxy Evolution Explorer are online at http://www.nasa.gov/galex and http://www.galex.caltech.edu .