NASA Telescope Sees Black Hole Munch on a Star
A giant black hole has been caught red-handed dipping into a cosmic cookie jar of stars by NASA's Galaxy Evolution Explorer. This is the first time astronomers have seen the whole process of a black hole eating a star, from its first to nearly final bites.

"This type of event is very rare, so we are lucky to study the entire process from beginning to end," said Dr. Suvi Gezari of the California Institute of Technology, Pasadena, Calif. Gezari is lead author of a new paper appearing in the Dec. 10 issue of Astrophysical Journal Letters. 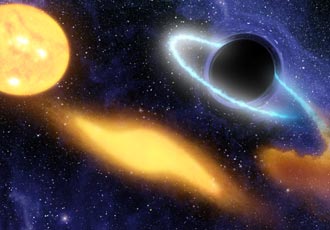 Image right: This artist's concept shows a supermassive black hole at the center of a remote galaxy digesting the remnants of a star. Image credit: NASA/JPL-Caltech
+ Full image and caption

For perhaps thousands of years, the black hole rested quietly deep inside an unnamed elliptical galaxy. But then a star ventured a little too close to the sleeping black hole and was torn to shreds by the force of its gravity. Part of the shredded star swirled around the black hole, then began to plunge into it, triggering a bright ultraviolet flare that the Galaxy Evolution Explorer was able to detect.

Today, the space-based telescope continues to periodically watch this ultraviolet light fade as the black hole finishes the remaining bits of its stellar meal. The observations will ultimately provide a better understanding of how black holes evolve with their host galaxies.

"This will help us greatly in weighing black holes in the universe, and in understanding how they feed and grow in their host galaxies as the universe evolves," said Dr. Christopher Martin of Caltech, a co-author of the paper and the principal investigator for the Galaxy Evolution Explorer.

In the early 1990s, three other resting, or dormant, black holes were suspected of having eaten stars when the joint German-American-British R?ntgen X-ray satellite picked up X-ray flares from their host galaxies. Astronomers had to wait until a decade later for NASA's Chandra X-ray Observatory and the European Space Agency's XMM-Newton X-ray observatory to confirm those findings, showing that the black holes' X-rays had faded dramatically -- a sign that stars were swallowed.

Now, Gezari and her colleagues have, for the first time, watched a similar feeding frenzy unfold, as it happens, through the ultraviolet eyes of the Galaxy Evolution Explorer. They used the telescope's detectors to catch an ultraviolet flare from a distant galaxy, then watched the flare diminish over time, as the galaxy's central black hole consumed the star. Additional data from Chandra, the Canada France Hawaii Telescope in Hawaii and the Keck Telescope, also in Hawaii, helped the team chronicle the event in multiple wavelengths over two years.

Black holes are heaps of concentrated matter whose gravity is so strong that even light cannot escape. Supermassive black holes are believed to reside at the cores of every galaxy, though some are thought to be more active than others. Active black holes drag surrounding material into them, heating it up and causing it to glow. Dormant black holes, like the one in our Milky Way galaxy, hardly make a peep, so they are difficult to study.

That's why astronomers get excited when an unsuspecting star wanders too close to a dormant black hole, an event thought to happen about once every 10,000 years in a typical galaxy. A star will flatten and stretch apart when a nearby black hole's gravity overcomes its own self-gravity. The same phenomenon happens on Earth every day, as the moon's gravity tugs on our world, causing the oceans to rise and fall. Once a star has been disrupted, a portion of its gaseous body will then be pulled into the black hole and heated up to temperatures that emit X-rays and ultraviolet light.

"The star just couldn't hold itself together," said Gezari, adding, "Now that we know we can observe these events with ultraviolet light, we've got a new tool for finding more."

The newfound feeding black hole is thought to be tens of millions times as massive as our sun. Its host galaxy is located 4 billion light-years away in the Bootes constellation.

An artist's concept and additional information about the Galaxy Evolution Explorer is online at http://www.nasa.gov/galex/ .

The California Institute of Technology in Pasadena, Calif., leads the Galaxy Evolution Explorer mission and is responsible for science operations and data analysis. NASA's Jet Propulsion Laboratory, also in Pasadena, manages the mission and built the science instrument. The mission was developed under NASA's Explorers Program managed by the Goddard Space Flight Center, Greenbelt, Md. Researchers sponsored by Yonsei University in South Korea and the Centre National d'Etudes Spatiales (CNES) in France collaborated on this mission.