NASA Telescope Catches Surprise Ultraviolet Light Show
It was a day like any other for a nearby star named GJ 3685A – until it suddenly exploded with light. At 2 p.m. Pacific time on April 24, 2004, the detectors on NASA's Galaxy Evolution Explorer ultraviolet space telescope nearly overloaded when the star abruptly brightened by a factor of at least 10,000. After the excitement was over, astronomers realized that they had just recorded a giant star eruption, or flare, about one million times more energetic than those from our Sun.

Findings on this intriguing event were presented today at the 206th meeting of the American Astronomical Society in Minneapolis, Minn. Movies based on images of the flare are available online at http://www.nasa.gov/centers/jpl/missions/galex.html and http://www.galex.caltech.edu/. 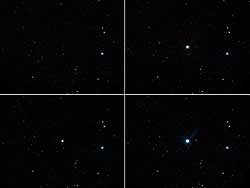 Image right: A still from a movie taken by NASA'S Galaxy Evolution Explorer that shows one of the largest flares, or star eruptions, ever recorded at ultraviolet wavelengths. The star, called GJ 3685A, just happened to be in the Galaxy Evolution Explorer's field of view while the telescope was busy observing galaxies. Image credit: NASA/JPL-Caltech.
+ Movie showing one of largest flare eruptions ever recorded at ultraviolet wavelenghts
+All images and full captions

This dramatic flare is just one of many serendipitous discoveries made by the Galaxy Evolution Explorer since its 2003 launch.

Though the telescope was originally designed to spot galaxies, it has repeatedly witnessed a sky flickering with ultraviolet flares, bursts and fast-moving streaks. While the flares and bursts are from different types of stars, the streaks are asteroids, satellites or possibly space debris floating across the telescope's field of view.

The findings have led astronomers to conclude that the ultraviolet sky, once thought to be a quiet backdrop for viewing galaxies, is, in fact, a rather festive place.

"We had no idea that the ultraviolet sky would be filled with so many things that go bump in the night," said Dr. Barry Welsh, University of California, Berkeley, co-discoverer of some of the flares. "All of these objects are a bonus to astronomers, since the observations come free when the telescope is aimed at distant galaxies."

"I was surprised by how often we have observed stellar flares and by the amazing size of some of them," said Dr. Chris Martin, principal investigator of the Galaxy Evolution Explorer, California Institute of Technology, Pasadena. "Nature rarely disappoints us."

So far, the Galaxy Evolution Explorer has recorded 84 bonus astrophysical events occurring on flaring stars, binary stars called dwarf novae, and pulsating stars, as well as countless pieces of space debris. These data are already being collected into public databases for other astronomers to study. For example, astronomers are using the new set of flare stars to test their flare theories.

The Galaxy Evolution Explorer is surveying the entire sky at ultraviolet wavelengths for clues to how the earliest galaxies evolved into mature galaxies like our own Milky Way. To detect these early, faint galaxies, the telescope was outfitted with specialized cameras that allow the arrival of each photon of ultraviolet light to be timed with a precision of about a microsecond. 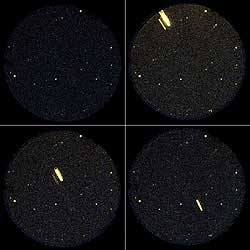 Image left: Since its launch in 2003, the space telescope -- originally designed to observe galaxies across the universe in ultraviolet light -- has discovered a festive sky blinking with flaring and erupting stars, as well as streaking asteroids, satellites and space debris. One such streaking object -- possibly an Earth-orbiting satellite -- can be seen here flying across the telescope's sight in this sped-up movie. Image credit: NASA/JPL-Caltech.
+ Movie showing streaking object, possibly Earth-orbiting satellite
+All images and full captions

"The telescope's detectors have provided an unprecedented time resolution of these astrophysical events," said Welsh. "Now, we can say what happens during each one-hundredth of a second of a flare event. That's better information than most video cameras have when they take slow motion shots of athletes."

A preliminary analysis of the enormous flare witnessed by the Galaxy Evolution Explorer around GJ 3685A – the largest ever recorded in ultraviolet light - shows that the mechanisms underlying these stellar eruptions may be more complex than previously believed. Evidence for the two most popular flare theories was found.

Flares are huge explosions of energy stemming from a single location on a star's surface. They happen regularly on many types of stars, though old, small "red dwarf" stars like GJ 3685A tend to experience them most frequently and dramatically. These stars, called flare stars, can erupt as often as every few hours, and with an intensity far greater than flares from our Sun. One of the reasons astronomers study flare stars is to gain a better picture and history of flare events taking place on the Sun.

Caltech leads the Galaxy Evolution Explorer mission and is responsible for science operations and data analysis. NASA's Jet Propulsion Laboratory, Pasadena, Calif., manages the mission and built the science instrument. The mission was developed under NASA's Explorers Program managed by the Goddard Space Flight Center, Greenbelt, Md. South Korea and France are the international partners in the mission.

For more information about the Galaxy Evolution Explorer, visit http://www.galex.caltech.edu/.