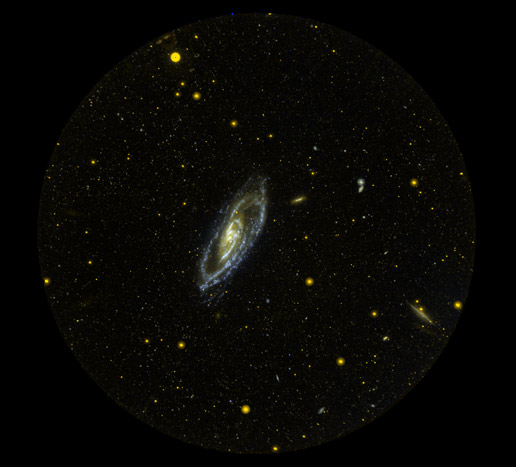 M106's extended arms are the blue filaments that curve around the edge of the galaxy, creating its outer disk. Tints of blue in the galaxy's arms reveal hot, young, massive stars. Meanwhile, traces of gold toward the center reveal an older stellar population and the presence of obscuring dust.

From 24 million-light years away, neighboring galaxy NGC 4248 can be seen sitting just right of M106. The irregular galaxy looks like a yellow smudge, with a bluish-white bar in the center. The galaxy's outer golden glow indicates a population of older stars, while the blue central region shows a younger stellar demographic.

Dwarf galaxy UGC 7365 also emerges at the bottom center of the frame, as a faint yellow smudge directly below M106. This galaxy is not forming any new stars, and looks much smaller than M106 despite being closer to Earth, at 14 million light-years away.

High-resolution TIFF (14Mb)
› Back To Top