Beyond the Borders of a Galaxy 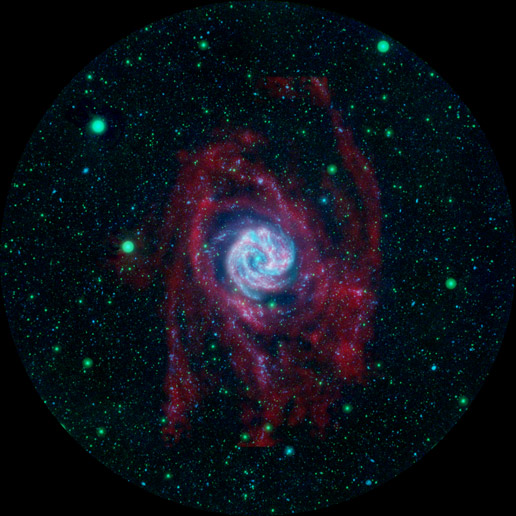 The outlying regions around the Southern Pinwheel galaxy, or M83, are highlighted in this composite image from NASA's Galaxy Evolution Explorer and the National Science Foundation's Very Large Array in New Mexico. The blue and pink pinwheel in the center is the galaxy's main stellar disk, while the flapping, ribbon-like structures are its extended arms.

The Galaxy Evolution Explorer is an ultraviolet survey telescope. Its observations, shown here in blue and green, highlight the galaxy's farthest-flung clusters of young stars up to 140,000 light-years from its center. The Very Large Array observations show the radio emission in red. They highlight gaseous hydrogen atoms, or raw ingredients for stars, which make up the lengthy, extended arms.

Astronomers are excited that the clusters of baby stars match up with the extended arms, because this helps them better understand how stars can be created out in the "backwoods" of a galaxy.

High-resolution TIFF (23Mb)
› Back To Top