What Lies Beyond the Edge of a Galaxy 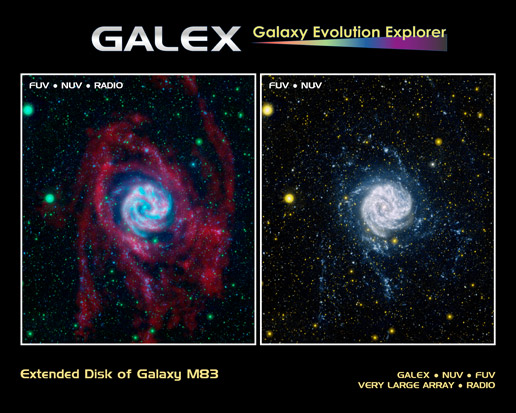 This side-by-side comparison shows the Southern Pinwheel galaxy, or M83, as seen in ultraviolet light (right) and at both ultraviolet and radio wavelengths (left). While the radio data highlight the galaxy's long, octopus-like arms stretching far beyond its main spiral disk (red), the ultraviolet data reveal clusters of baby stars (blue) within the extended arms.

The ultraviolet image was taken by NASA's Galaxy Evolution Explorer between March 15 and May 20, 2007, at scheduled intervals. Back in 2005, the telescope first photographed M83 over a shorter period of time. That picture was the first to reveal far-flung baby stars forming up to 63,000 light-years from the edge of the main spiral disk. This came as a surprise to astronomers because a galaxy's outer territory typically lacks high densities of star-forming materials.

The newest picture of M83 from the Galaxy Evolution Explorer is shown at the right, and was taken over a longer period of time. In fact, it is one of the "deepest," or longest-exposure, images of a nearby galaxy in ultraviolet light. This deeper view shows more clusters of stars, as well as stars in the very remote reaches of the galaxy, up to 140,000 light-years away from its core.

The view at the left is a combination of the ultraviolet picture at the right and data taken by the telescopes of the National Science Foundation's Very Large Array in New Mexico. The radio data, colored here in red, reveal extended galactic arms of gaseous hydrogen atoms, which are raw ingredients for stars. Astronomers are excited that the remote clusters of baby stars match up with the extended arms, because this helps them better understand how stars can be created out in the boondocks of a galaxy.

M83 is located 15 million light-years away in the southern constellation Hydra.