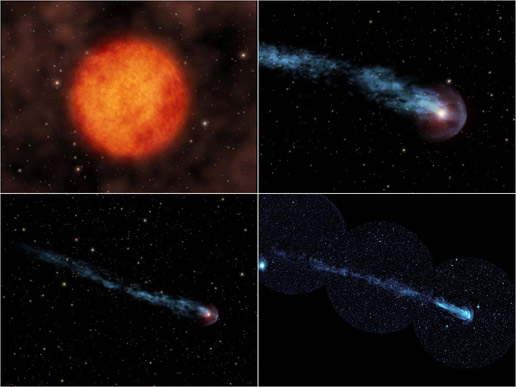 This artist's animation illustrates a star flying through our galaxy at supersonic speeds, leaving a 13-light-year-long trail of glowing material in its wake. The star, named Mira (pronounced my-rah) after the Latin word for "wonderful," sheds material that will be recycled into new stars, planets and possibly even life. NASA's Galaxy Evolution Explorer discovered the long trail of material behind Mira during its survey of the entire sky in ultraviolet light.

The animation begins by showing a close-up of Mira - a red-giant star near the end of its life. Red giants are red in color and extremely bloated; for example, if a red giant were to replace our sun, it would engulf everything out to the orbit of Mars. They constantly blow off gas and dust in the form of stellar winds, supplying the galaxy with molecules, such as oxygen and carbon, that will make their way into new solar systems. Our sun will mature into a red giant in about 5 billion years.

As the animation pulls out, we can see the enormous trail of material deposited behind Mira as it hurls along between the stars. Like a boat traveling through water, a bow shock, or build up of gas, forms ahead of the star in the direction of its motion. Gas in the bow shock is heated and then mixes with the cool hydrogen gas in the wind that is blowing off Mira. This heated hydrogen gas then flows around behind the star, forming a turbulent wake.

Why does the trailing hydrogen gas glow in ultraviolet light? When it is heated, it transitions into a higher-energy state, which then loses energy by emitting ultraviolet light - a process known as fluorescence.

Mira is located 350 light-years from Earth in the constellation Cetus, otherwise known as the whale. Coincidentally, Mira and its "whale of a tail" can be found in the tail of the whale constellation.