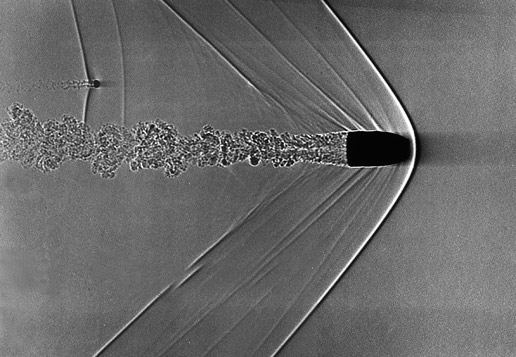 A bullet traveling through air at about 1.5 times the speed of sound can be seen in this image. When a moving object breaks the sound barrier, a shock wave and often turbulence are created. In this image, the curved line at the nose of the bullet is a shock wave. Other shock waves can be seen alongside the bullet, and a turbulent wake trails behind it.

NASA's Galaxy Evolution Explorer captured an image of a racing star, called Mira, that resembles this bullet photo. The ultraviolet image shows a gigantic shock wave, called a bow shock, in front of the star, and an enormous, 13-light-year-long trail of turbulence in its wake. Nothing like this tail has ever been seen before.

This image was created using an instrument called a shadowgraph.