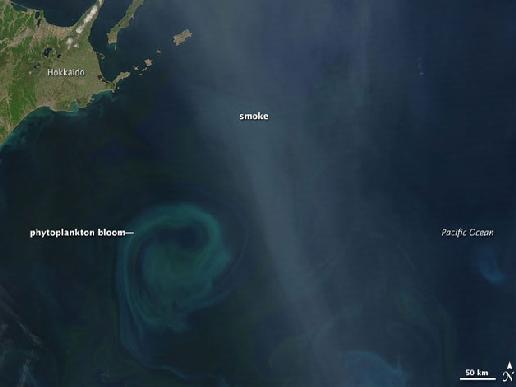 Smoke colored the sky while phytoplankton colored the water near Japan in late May 2009. The Moderate Resolution Imaging Spectroradiometer (MODIS) on NASA’s Aqua satellite captured this image on May 21, 2009.

Translucent blue-gray smoke forms a diagonal streak east of Hokkaido, passing over the Kuril (or Kurile) Islands. The smoke likely originates from fires in Russia and Mongolia.

Immediately west of the smoke plume appears a peacock-blue swirl from a bloom of phytoplankton—ocean-based microscopic plants that form the basis of the marine food chain. (The high-resolution image shows an extensive fabric of blooms.) Springtime phytoplankton blooms near Japan may be triggered by iron-rich dust blowing eastward from the Gobi Desert.