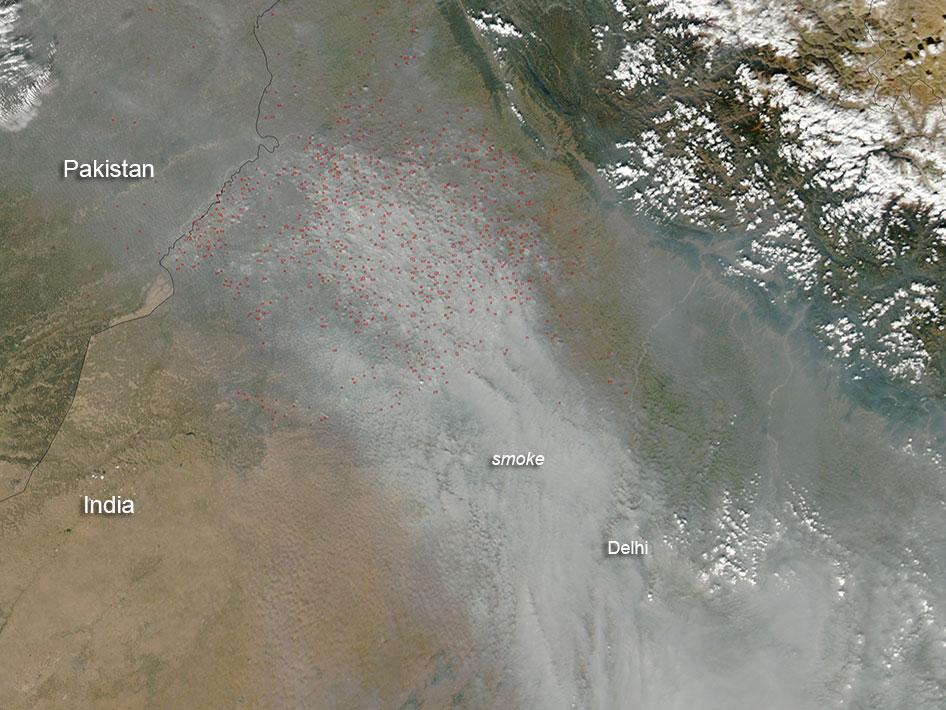 The Indian state of Punjab has two growing seasons—one from May to September and another from November to April. In November, Punjab farmers typically sow crops such as wheat and vegetables; but before they do that, farmers often set fire to fields to clear them for planting. That was probably the case on November 5, 2012, when the Moderate Resolution Imaging Spectroradiometer (MODIS) on NASA’s Aqua satellite captured this natural-color image.

Red outlines show the approximate locations of active burning. A multitude of fires spans more than 250 kilometers (150 miles) from east to west, and the smoke plume extends far to the southeast, obscuring the satellite’s view of Delhi. Although the smoke appeared to originate primarily from the agricultural fires, other factors such as urban and industrial smog may have contributed. According to news reports, thick smog hovered over Delhi for several days in early November.

Punjab comprises only about 1.6 percent of India’s land surface, but thanks to fertile soils and the adoption of agricultural advances from the Green Revolution, the state grows about one-fifth of India’s wheat. Preparing for planting with fire has the benefit of clearing out some pests that eat crops and turning crop residues from the previous season into fertilizing ash.

But the smoke also can harm human health, aggravating heart and lung disease. Humans evolved in the presence of fire and healthy young adults can generally withstand vegetation smoke. But older adults, children, and people with chronic health conditions are at risk. The smoke may include thousands of compounds, including carbon dioxide, carbon monoxide, nitrogen oxides, and particulate matter. These components have the potential to affect human health, but exactly how different types of smoke affect people is not yet fully understood.