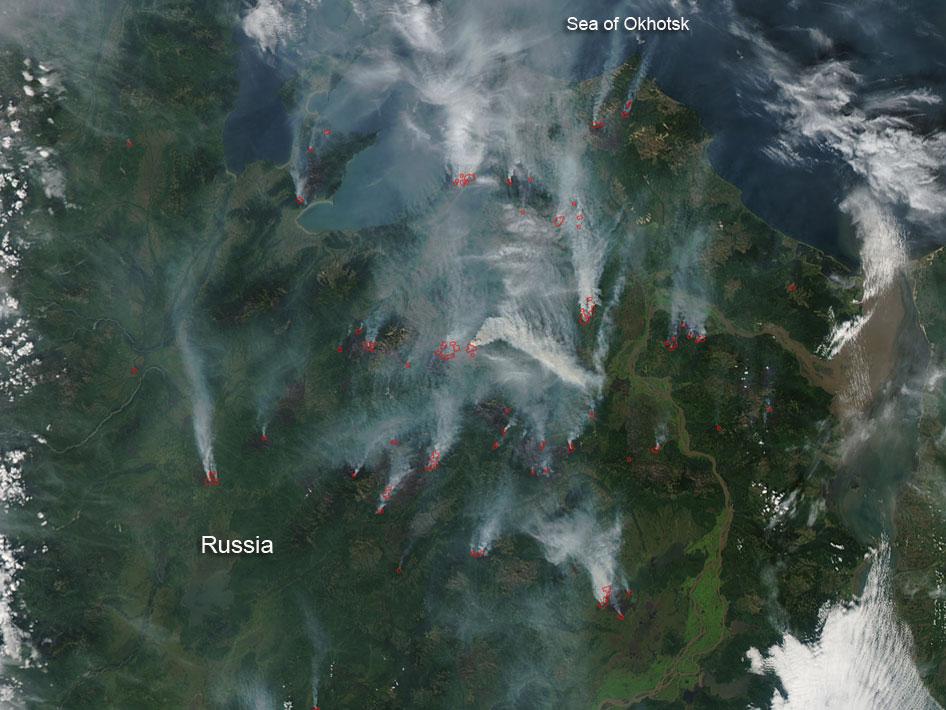 Forests and bog land in far eastern Russia have been burning since the beginning of June 2012. Contributing to the record fires have been the record temperatures of this past summer. This summer in Siberia has been one of hottest on record. The average temperature ranged around 93 degrees Fahrenheit and there doesn't seem to be any break in the weather coming anytime soon.

The fires in eastern Russia have affected the districts of Krasnoyarsk, Tuva, Irkutsk, Kurgan, and the Republic of Khakassia. Especially hard hit is the city of Tomsk. According to official figures, over 24,000 acres of land had been burnt in Tomsk by early August. The city has been covered by heavy smog for weeks and the airport has been out of operation since the beginning of July.

On August 23rd, the Russian Information and News Agency (RIA Novosti) reported that "firefighters extinguished all six forest fires over the past 24 hours that remained raging in Russia’s Siberia this summer, the regional forestry department said in a statement on Thursday. There are no more registered fires in the region, but the emergencies situation still remain in force in three areas of the Tomsk region due to the high risk of new wildfires outbreak," the statement added. However, it also reported that "more than 200,000 hectares [494.210 acres] of forest already burned down in Siberia and the Russian Far East, where fires are still raging, since the start of the summer." On August 28, RIA Novosti reported that: "The majority of wildfires triggered by the summer heat wave in Russia have been put out, but 11 wildfires with a total area of 838 hectares [over 2000 acres] are still raging in Khabarovsk Territory." These are the fires that still burn in the image taken today by the MODIS instrument on the Aqua satellite.

Of course wildfires are devastating to any area, but ecologically this is catastrophic for this region with many rare animals living in Siberia's unique ecosystem.

So to the fires burning in Russia will have worldwide effects as the torched peat bogs whose layers consist of dead plant materials will end up releasing large quantities of carbon dioxide into the air accelerating the greenhouse effect and making the air nearly unbreathable. Record numbers of fires in the summer of 2010 drew attention to this damaging situation (see NY Times article cited below).

In the early 1900's Soviet engineers drained swamps to supply peat for electrical power stations. It was eventually stopped in the 1950's but the bogs were never reflooded. Unfortunately, that approach is currently causing some of the wildfire problems and air quality issues that Russia is dealing with today.

Officials and residents are hoping that the upcoming expected harvest rains will help extinguish the wildfires and bring a much needed natural remedy to the affected regions.