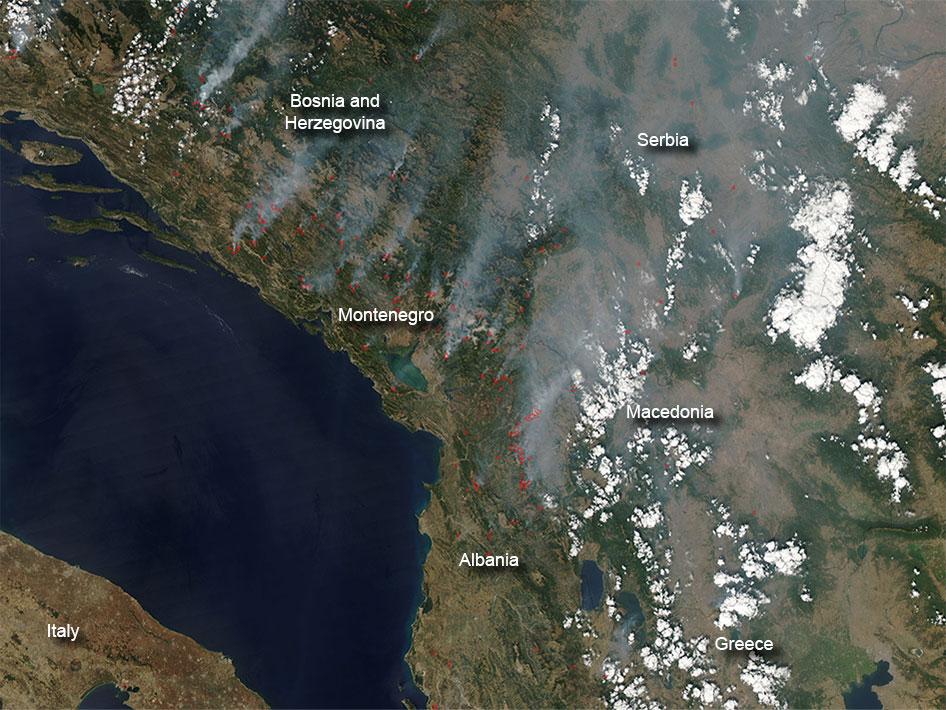 Wildfires are spreading across Albania, mainly due to the dry season and strong winds. One hundred and forty eight acres of vineyards and olive groves have been destroyed by the flames so far. Fiirefighting has been difficult due to extreme terrain. In the northern area, fires are threatening homes in two villages, prompting evacuations. The Environment Ministry's Directorate of Environmental Control says a number of fires were intentionally set to clear fields.

In Greece some 20 major blazes have been raging. Investigations as to the cause of these fires is still under scrutiny by Greece's secret services. Arson is a possibility. Two French tourists were detained on the Greek island of Andros, suspected of accidentally starting a fire.

Parts of the Balkans are also burning amid a heatwave. Weeks of wildfires in Bosnia are taking their toll on the tourist trade. Serbian authorities have evacuated thousands of people as wildfires rage in a number of villages in the southwest of the country with the worst fires in the Cacak region. Police are joining the Serbian army in battling the blazes. Russia has sent a fire-fighting plane to assist their efforts.

Firefighters in Montenegro are struggling to contain wildfires that are threatening an ancient pine forest in the northeast of the country. These trees are extremely important to the country. Some of these trees are close to 400 years old. Fires have erupted amid extremely high temperatures in the Balkans, reaching around 104 Fahrenheit in Montenegro in the past weeks. Fires have destroyed hundreds of acres of forests and about a dozen houses and stables. Firefighters have been using planes and choppers, but efforts are hampered by hilly terrain and occasional strong winds.

This natural-color satellite image shows the smoke streaming from the dozens of fires in southeastern Europe. It was collected by the Moderate Resolution Imaging Spectroradiometer (MODIS) aboard the Aqua satellite on August 26, 2012. Actively burning areas, detected by MODIS’s thermal bands, are outlined in red.