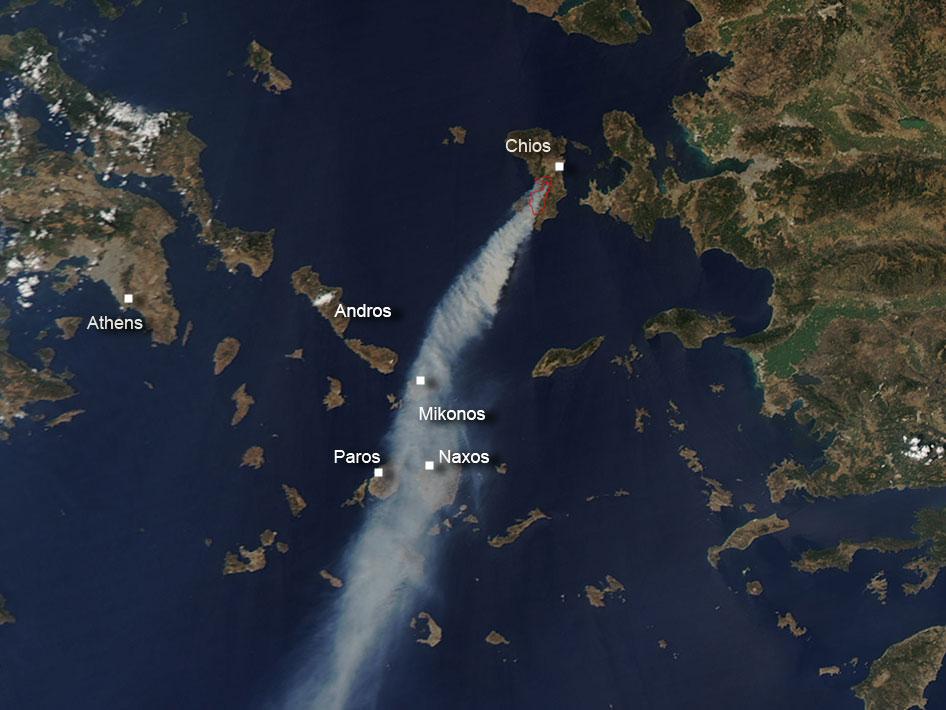 Fires on the Greek Island of Chios

A major forest blaze broke out shortly after 2 am on Saturday morning, August 18, 2012, on the Greek eastern Aegean Sea island of Chios. Hundreds of firefighters, soldiers and volunteers were struggling for a third day Monday (August 20) to tame a fire that burnt some 17,000 acres of forest, cultivated land and groves of the island's famed mastic trees. Chios is famous for the production of mastic, a gum-like resin with a distinctive flavor produced only by trees on certain parts of the island. It is used widely in confectionery, cooking and cosmetics and a major source of income. Local authorities said many of the trees had been burned, while the island's beekeepers had also lost 60 percent of their hives.

Smoke from the blaze, which was swept on by gale-force winds, was carried as far as the southern island of Crete, more than 230 miles away. Those gale-force winds are hampering efforts by about 360 firefighters, soldiers and volunteers, as well as firefighting planes, helicopters and 50 vehicles. Residents of nine villages and hamlets evacuated their homes over the weekend as a precaution.

This natural-color image was taken by the Moderate Resolution Imaging Spectroradiometer (MODIS) instrument on NASA's Aqua satellites on August 18, 2012.