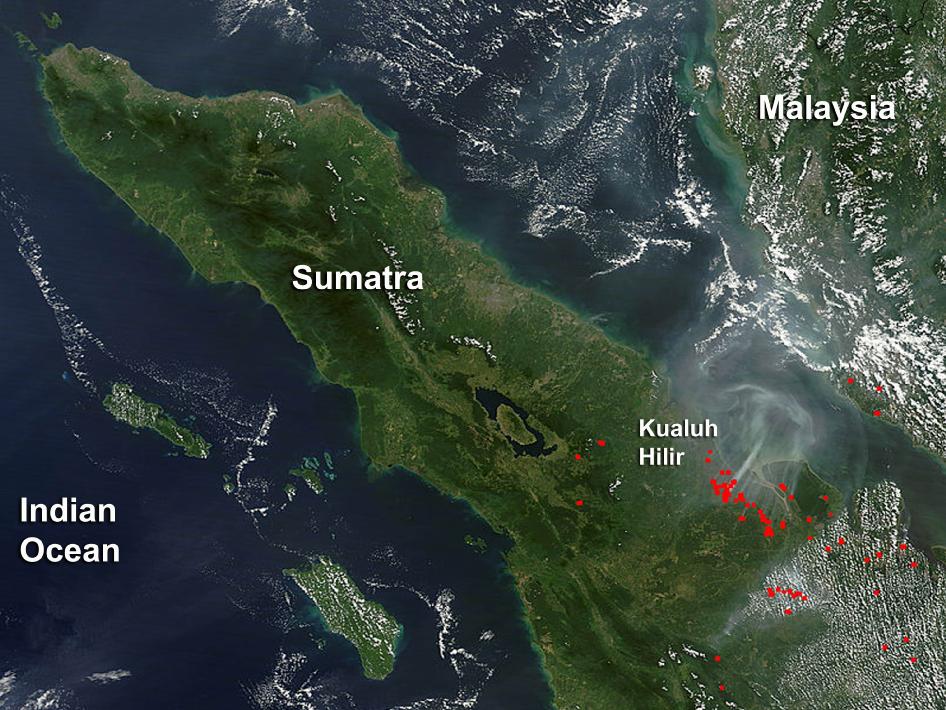 Smoke blows from forest fires on the Indonesian island of Sumatra, as shown in this image taken by NASA's Terra satellite on June 14, 2012 at 03:45 UTC (June 13, 2012, 11:45pm ETC, U.S.) Hotspots detected by the Moderate Resolution Imaging Spectroradiometer (MODIS) are indicated in red. Sumatra is currently in its dry season, which occurs between May and September.

The Jakarta Post reported on June 16, 2012 (June 15, 2012 EDT/U.S.) that Rokan Hilir has the most "hotspots" (fires) in Riau. The fires are burning peat and forestland and have created smoke and haze. According to the Rokan Hilir Environmental Impact Management Agency 33 fires are burning in ten 10 districts in the regency.

Sumatra is no stranger to natural disasters. Being along the Pacific Ring of Fire, Sumatra has experienced many extreme earthquakes and volcanos, including a magnitude-8.6 earthquake this past April and the tsunami-inducing magnitude-9.1 earthquake from December, 2004. The ring-shaped Lake Toba is the world's largest volcanic lake, created in a supervolcanic eruption about 74,000 years ago.