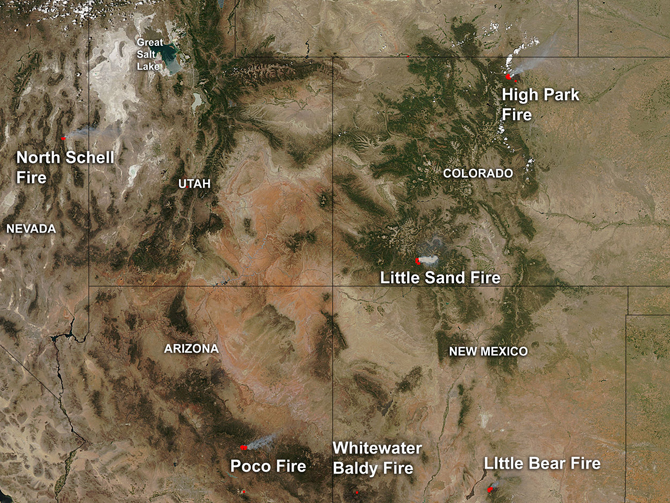 Fires are raging in the western U.S. and in one overpass from its orbit around the Earth, NASA's Aqua satellite picked up smoke and identified hot spots from fires in Colorado, Nevada, Arizona and New Mexico.

MODIS infrared imaging can detect heat. Just as the infrared imagery from another instrument onboard Aqua, called the Atmospheric Infrared Sounder (AIRS) is used to detect temperature of clouds, land and sea surface, MODIS data can detect hot spots on land. In the MODIS images, fires, or hot spots are color coded as red areas in imagery and smoke appears in light brown. Images are generated at NASA's Goddard Space Flight Center in Greenbelt, Md.

As of June 22, Colorado's High Park Fire has burned 68,200 acres and has destroyed 189 homes, according to the U.S. Forest Service on the Inciweb. Inciweb is the Incident Inter-agency system, that tracks U.S. fire-related incidents, specifically wildland fires. The High Park Fire is located in the Roosevelt National Forest, about 15 miles west of Fort Collins, Colo. and was started by a lightning strike.

In southern Colorado, the Little Sand Fire is generating a thick plume of smoke in the Aqua satellite image. The fire is located 13 miles northwest of Pagosa Springs and has so far consumed 15,987 acres, according to Inciweb. Like the High Park Fire, it started from a lightning strike. It began on May 13 in the San Juan National Forest.

In Nevada, the North Schell Fire in the east central part of the state continues to burn and create a lot of smoke in the satellite imagery. According to the U.S. Forest Service on the Inciweb website, the North Schell Fire had consumed 11,987 acres on June 22, 2012. The fire began as a U.S. Forest Service prescribed burn on June 9. The area is managed by the Ely District of the U.S. Bureau of Land Management.

In Arizona, the Poco Fire in the Tonto National Forest appears to be creating the most smoke of the various wildfires burning in the state. The Poco Fire was human caused, and first reported on June 14, and is located northeast of Young, Ariz. By June 22, it had burned 11,950 acres, according to the U.S. Forest Service.

Smoke and the heat signatures from the Whitewater-Baldy Complex and Little Bear fires in New Mexico were also visible in the MODIS imagery from NASA's Aqua satellite.

In New Mexico, the Whitewater-Baldy complex fire has now consumed 296,980 acres, according to Inciweb. This is a fire that has generated a tremendous amount of smoke over the last several weeks.

The Little Bear fire is located in the Lincoln National Forest and had consumed 42, 980 acres as of June 22. According to the U.S. Forest Service, this fire was caused by lightning on June 4. Little Bear has destroyed 254 structures, and there are a number of area and road closures in effect. For more details, visit: http://www.inciweb.org/incident/2903/.