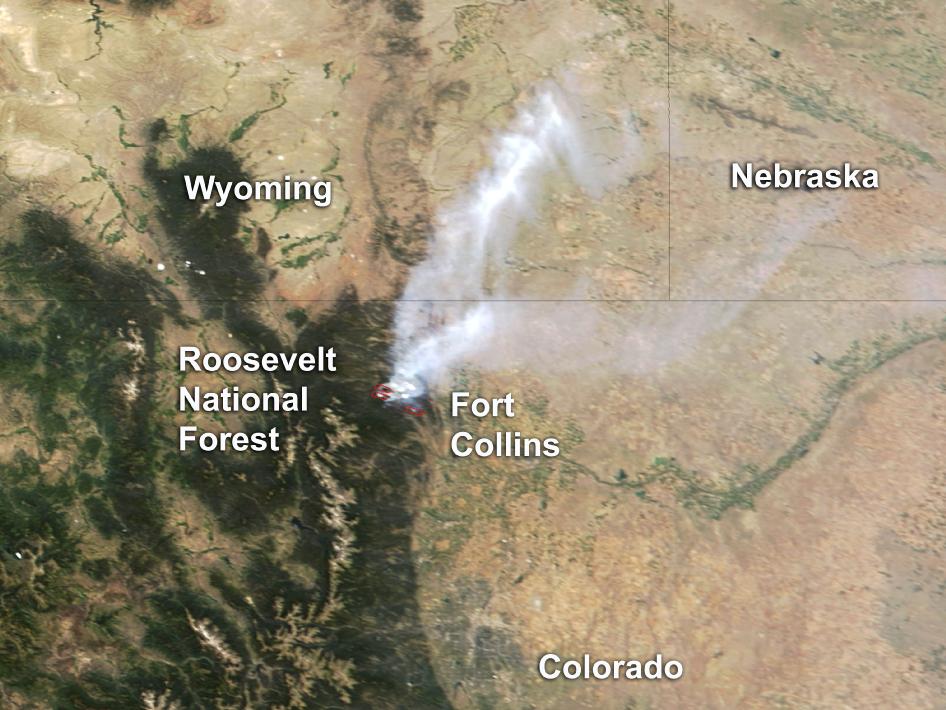 Colorado's High Park Fire continues to expand and generate a lot of smoke visible on NASA satellite imagery. NASA's Terra satellite showed winds from the west-southwest blowing the smoke to the north-northeast and into Wyoming and southwestern Nebraska on June 19, 2012.

The High Park Fire is located approximately 15 miles west of Fort Collins, Colo., and is now 55 percent contained. To date, 189 homes have been lost, according to the U.S. Forest Service. More than 1,900 people are currently battling the fire, and about 1.3 million gallons of water have been dropped on it. As of June 20, the fire has consumed 65,738 acres, up from the previous day's total area of 59,500.

On June 19, 2012, at 1840 UTC (2:40 p.m. EDT) the light brown colored smoke and the heat signatures from the fires were detected by the Moderate Resolution Imaging Spectroradiometer (MODIS) instrument that flies onboard NASA's Terra satellite.

Inciweb reports that pre-evacuation notices were issued to a number of areas. The U.S. Forest Service reported that fire was spotted "across the Poudre Canyon on the northwest corner of the fire triggered additional evacuations for the Glacier View subdivision and additional pre-evacuation notices west to Glen Echo Resort." For a complete list of those areas and more information and firefighting updates, visit the Inciweb website: http://www.inciweb.org/incident/2904/.

For an unlabeled, high-resolution version of this image, visit: http://lance-modis.eosdis.nasa.gov/cgi-bin/imagery/single.cgi?image=Colorado.A2012171.1840.250m.jpg.