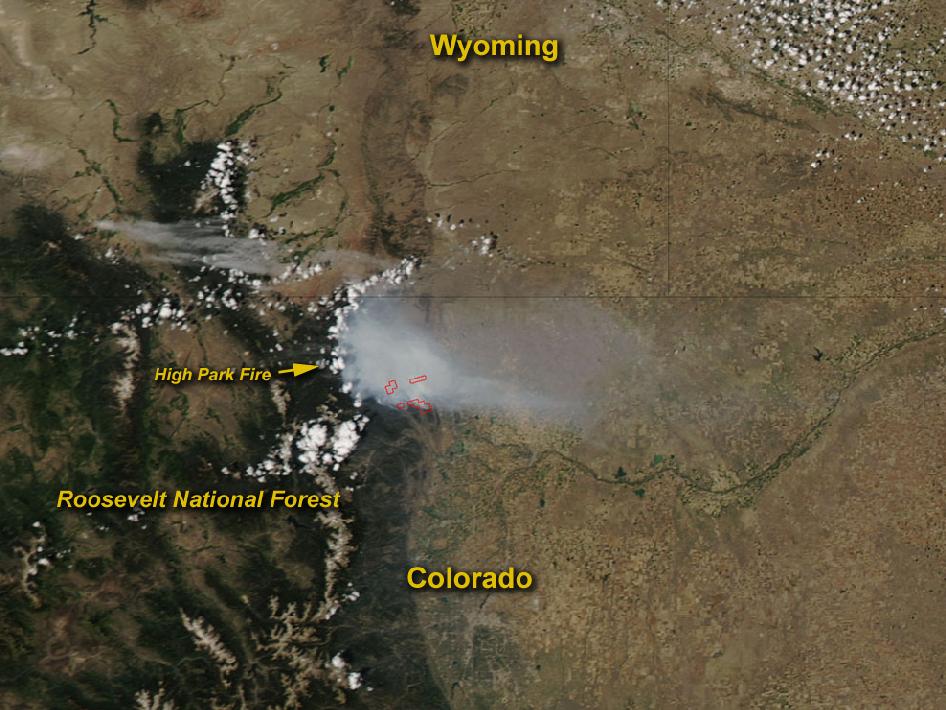 The High Park Fire is located approximately 15 miles west of Fort Collins, Colorado. The U.S. Forest Service noted on the Inciweb website, "The northeast portion of the fire is active and continues to be an area of concern. On Monday, firefighters were able to anchor the southwestern corner of the fire, which will help start to establish fire line."

On June 11, 2012 at 1935 UTC (3:35 p.m. EDT) the light brown colored smoke and the heat signatures from the fires were detected by the Moderate Resolution Imaging Spectroradiometer (MODIS) instrument that flies onboard NASA's Aqua satellite.

Evacuations have been in effect and a general evacuation area extends from west of Horsetooth Reservoir, to north of Masonville, east of Pennock Pass and south of Highway 14. Another evacuation area includes the area north of Highway 14 from Hewlitt Gulch to 287 and north to Eagles Nest. One death has been attributed to the fire, which started from a lightning strike on June 9, 2012 at 5:54 a.m. MDT according to the U.S. Forest Service.

Winds are expected to blow from the south-southeast today, June 12, 2012, blowing smoke to the north-northeast. According to the National Weather Service, the forecast for the area near Mt. McConnell and West White and East White Pine Mountains in the Roosevelt National Forest calls for sunshine and a high temperature near 71 with breezy conditions. The winds are expected from the south-southwest and may gust to 24 mph. At night on June 12, the forecast calls for lows near 42 and winds gusting as high as 18 mph. The gusty winds are again forecast for Wednesday, June 13.