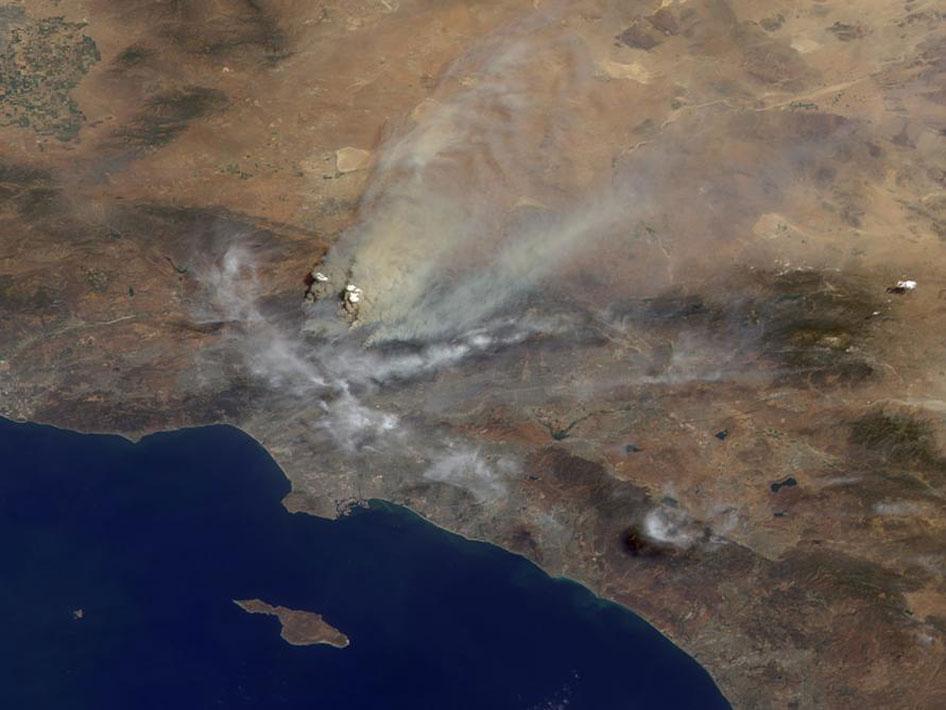 Triple-digit temperatures, extremely low relative humidities, dense vegetation that has not burned in decades, and years of extended drought are all contributing to the explosive growth of wildfires throughout Southern California. The Station fire, which began Aug. 26, 2009, in La Canada/Flintridge, not far from NASA's Jet Propulsion Laboratory, had reportedly burned 105,000 acres (164 square miles) of the Angeles National Forest by mid-day Aug. 31, destroying at least 21 homes and threatening more than 12,000 others. It is one of four major fires burning in Southern California at the present time.

This image was acquired mid-morning on Aug. 30 by the backward (northward)-viewing camera of the Multi-angle Imaging SpectroRadiometer (MISR) instrument on NASA's Terra satellite. The image is shown in an approximate perspective view at an angle of 46 degrees off of vertical. The area covered by the image is 245 kilometers (152 miles) wide. Several pyrocumulus clouds, created by the Station Fire, are visible above the smoke plumes rising from the San Gabriel Mountains north of Los Angeles in the left-center of the image. Smoke from the Station fire is seen covering the interior valleys along the south side of the San Gabriel Mountains, along with parts of the City of Los Angeles and Orange County, and can be seen drifting for hundreds of kilometers to the east over the Mojave Desert.

The accompanying plots are histograms that display the heights of the smoke plumes and wind speeds. In this data set, the plume is injecting smoke more than 7 kilometers (4.3 miles) above sea level.

MISR observes the daylit Earth continuously and every 9 days views the entire globe between 82 degrees north and 82 degrees south latitude. This image was generated from a portion of the imagery acquired during Terra orbit 51601.