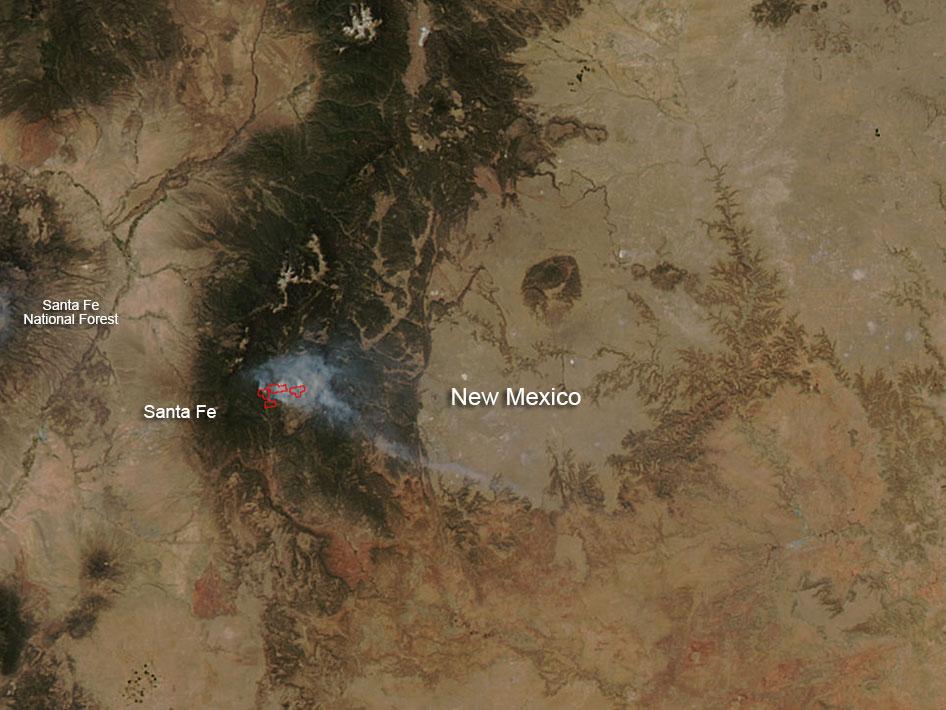 NASA’s Aqua satellite captured an image of a large light-brown colored plume of smoke blowing east-southeast from the Tres Lagunas Fire burning in New Mexico. On June 3, the smoke is forecast to blow in a more northerly and easterly direction, affecting Las Vegas, I-25 and surrounding communities.

The Moderate Resolution Imaging Spectroradiometer (MODIS) instrument aboard NASA's Aqua satellite has infrared capabilities that can detect heat from the various wildfires. This image was captured on May 31, 2013 21:00 UTC (5 p.m. EDT/3p.m. MT). In the MODIS images, fires, or hot spots are color coded as red areas in imagery and smoke appears in light brown. Images are generated at NASA's Goddard Space Flight Center in Greenbelt, Md.

According to Inciweb, the fire was started by a downed power line on May 30. The fire started about 10 miles north of Pecos, New Mexico. As of June 2, the fire has burned 7,476 acres. The fire is currently uncontained, and evacuations have already taken place for 134 summer homes and up to 10 primary residences along Highway 63. Voluntary evacuations were issued for Cow Creek area residents. Authorities established an evacuation center at the Pecos High School Gymnasium, and the San Miguel Sheriff’s Posse Pecos Rodeo grounds has been established for evacuees to bring pets and livestock. A part of Highway 63 beginning at mile marker 12 north toward Jacks Creek Campgrounds has been closed due to the fire. Highway 63 runs from north to south, just west of the center of the fire. For updates: inciweb.org/incident/3401