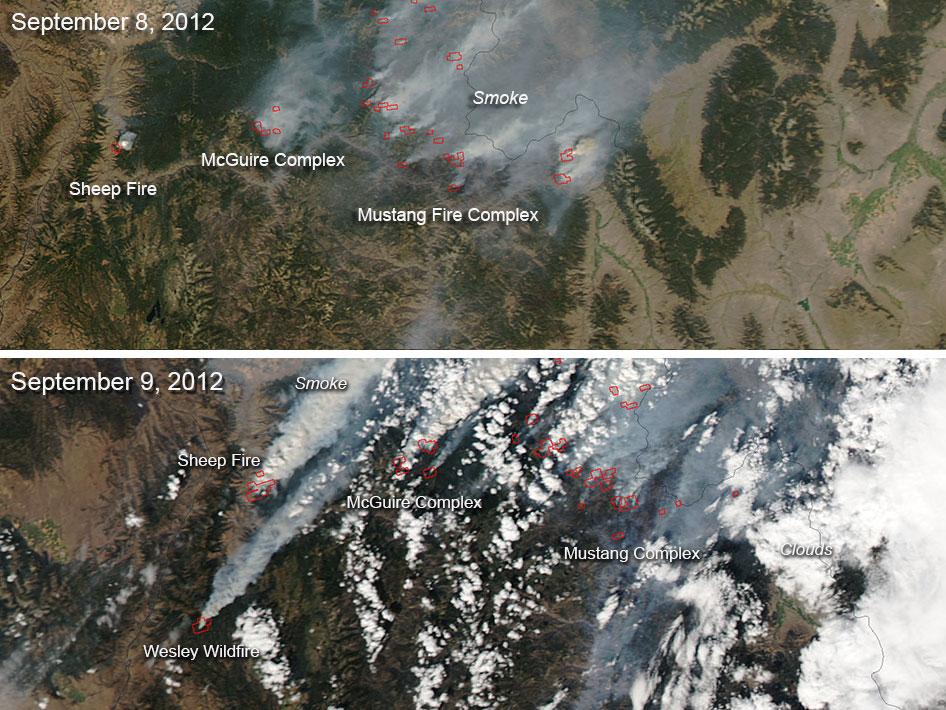 The Difference of a Day

What a difference a day makes. These two natural color images both captured by the Moderate Resolution Imaging Spectroradiometer (MODIS) instrument on the Aqua satellite show the Idaho wildfires one day apart. On September 8, 2012, the top image shows some of the fires currently burning in Idaho.

The Mustang Complex Fire which was started by a lightning strike over six weeks ago on the weekend of July 28-29 is currently only 16% contained and over 261,000 acres have been affected. Five of the fires, the Mustang, Broomtail, Roan, Cayuse and East Butte have burned together. The Lost Packer Fire continues to burn and increase in size. Due to steep and rocky terrain, containment of the fire will be difficult in the absence of substantial precipitation. Firefighters continue to be challenged by exceptionally dry fuels, rugged terrain, and frequent adverse fire weather conditions. The current estimation for containment of the fire is September 30, 2012.

The McGuire Complex Fire (which contains the former Bagley wildfire) consists of the McGuire and Herman wildfires. There is very poor access to the fire areas with limited safety zones for firefighters. This complex has also been active since July 27 when a lightning strike started the fire. This complex includes over 18,000 affected acres and is currently about 5% contained. Smoke from both of these large, long burning fires streams to the northeast in both images. These two fires look relatively the same in both images. The only difference being the mixing of clouds and smoke on September 8.

For the larger image of the September 8 fires click the date link. The September 9 full image is found by clicking on the "full image" to the right.