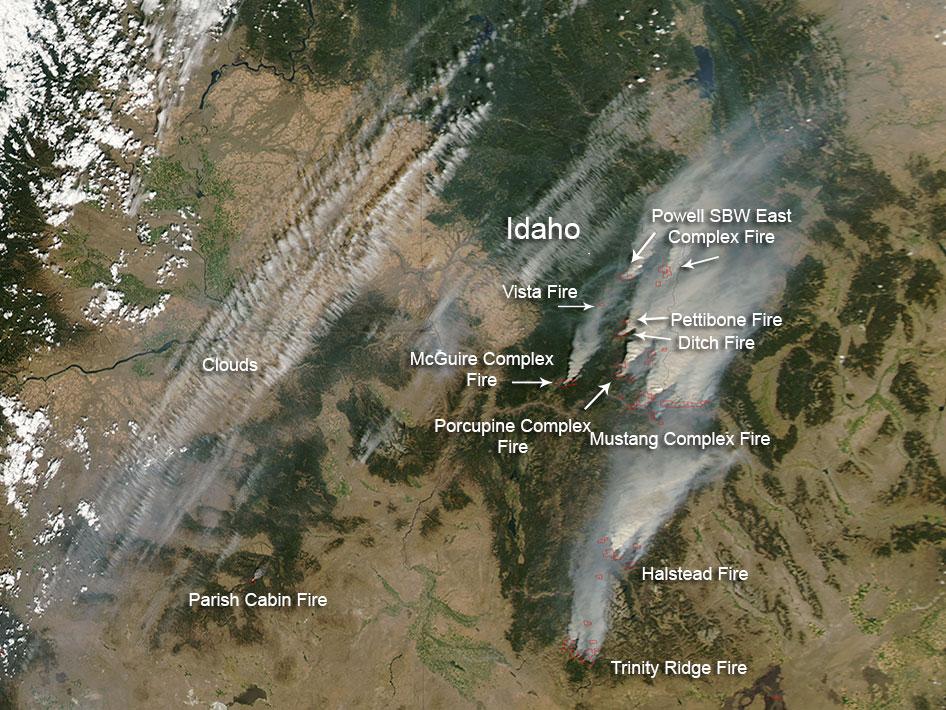 Idaho continues to be plagued by wildfires across the state. In fact, as the dry, hot weather continues more crop up. The three largest fires that are currently burning in Idaho are the Mustang Complex Fire, Halstead Fire, and Trinity Ridge Fire.

The Mustang Complex Fire which was started by a lightning strike on the weekend of July 28-29 is currently only 14% contained and over 181,000 have been affected. Five of the fires, the Mustang, Broomtail, Roan, Cayuse and East Butte have burned together. The Lost Packer Fire continues to burn and and increase in size. To date, no homes have been lost to the fire. Containment of the fire will be difficult in the absence of substantial precipitation. Firefighters continue to be challenged by exceptionally dry fuels, rugged terrain, and frequent adverse fire weather conditions. The current estimation for containment of the fire is September 30, 2012.

The Halstead Fire also started with a lightning strike on July 27. At this point almost 111,000 acres have been affected and this fire is only 7% contained. There was moderate fire spread to the Southeast. Firefighters prepped under the powerline along Highway 75 which means they removed vegetation around it so the fire won't be able to burn intensely or quickly in that area. The fire is well established in Kelley Creek, Noho Creek, Basin Creekand west of Yankee Creek. Both the growth potential of the fire and the terrain in which they are fighting this fire are extreme. The projected date for containment still remains October 16, 2012.

Unlike the other two fire, the Trinity Ridge Fire's cause was human in nature. This fire started on August 3 and has currently affected over 138,000 acres. It is only 10% contained. Growth potential for this fire is extreme and the terrain is difficult. A cold front is moving over the area, bringing cooler temperatures and higher humidity. However, winds are expected to increase and gust up to 24 mph which could cause the fire to spread. The projected date for containment remains October 1.

The other fires notated make up approximately 41,000 acres that are burning in the state. All fires that are shown on this map, other than Trinity Ridge, were caused by lightning strikes. (The Parish Cabin fire is a 4,000 acre fire which started August 28. It is burning in Oregon and its cause is currently unknown.) Until more humidity or cooler temperatures make their way into this region, it is likely that the fires will continue.

This natural-color satellite image shows smoke streaming from the fires. It was collected by the Moderate Resolution Imaging Spectroradiometer (MODIS) aboard the Aqua satellite on August 28, 2012. Actively burning areas, detected by MODIS’s thermal bands, are outlined in red.