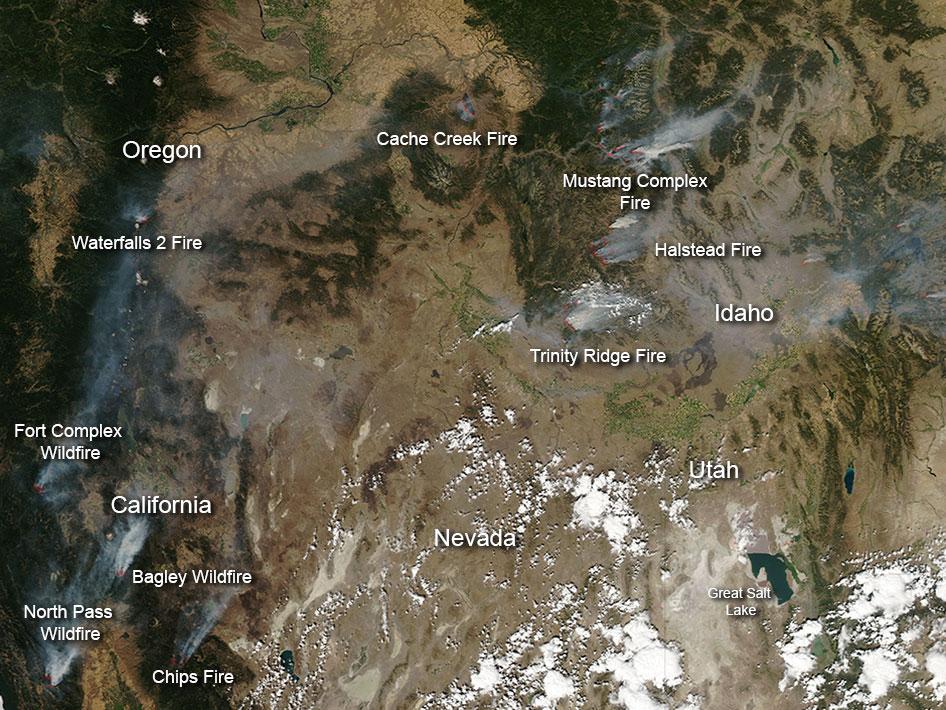 Wildfires Not Releasing Hold On the West

Wildfires in the West are not abating at all. In fact, as the dry, hot weather continues more crop up. The Mustang Complex Fire which was started by a lightning strike on the weekend of July 28-29 is currently only 12% contained and over 136,000 have been affected. Five of the fires, the Mustang, Broomtail, Roan, Cayuse and East Butte have burned together. The Lost Packer Fire continues to burn and and increase in size. The Mustang fire crossed the Forest Service 038 road and spread into Montana near Blue Nose Lookout. Fires are in the steep, inaccessible terrain. The current estimation for containment of the fire is September 30, 2012.

The Halstead Fire also started with a lightning strike on July 27. At this point almost 103,000 acres have been affected and this fire is only 7% contained. The fire continued to spread to the southeast on Sunday. The fire is firmly eastablished in the Kelly Creek, Noho Creek, Basin Creek andn west of Yankee Creek. A few more showers are predicted over Sunday night (Aug. 26) and into Monday morning (Aug. 27). That should increase the humidity over the fire and hopefully help slow the burning a little bit. Both the growth potential of the fire and the terrain in which they are fighting this fire are extreme. The projected date for containment still remains October 16, 2012.

Unlike the other two fire, the Trinity Ridge Fire's cause was human in nature. This fire started on August 3 and has currently affected over 123,000 acres. It is still only 5% contained. Growth potential for this fire is extreme and the terrain is difficult. Thunderstorm cells did cross the fire area with wind gusts above 20 mph which increased fire activity north of Featherville. Thunderstorms are still possible this evening and overnight. Over the next couple of days, warmer temperatures and lower humidity levels will challenge firefighters' efforts.The projected date for contained is October 1.

The Cache Creek Fire, which started by a lightning strike on August 20th, is located in the Hells Canyon National Recreation Area (HCNRA) in the Cache Creek area. The fire is located in the northern HCNRA, adjacent to the Snake River on the Oregon/Washington border. The fire covers 45,000 and is currently 40% contained. Both the growth potential for the fire and the terrain being navigated to fight this fire are extreme. Strong, erratic winds curtailed planned burnouts particularly along the Cold Springs Road. The projected date for containment is September 5, 2012.

Waterfalls 2 Fire was started by a lightning strike on August 2nd. The fire is burning in high elevation timber where terrain and access are making firefighting efforts difficult. Warm temperatures, low humidities, and west-southwest afternoon winds are contributing to extreme fire behavior. Fire behavior has been too intense at the head for direct attack, especially in the afternoon-evening hours. It is currently burning over 11,000 acres and is 20% contained. The estimated containment date for this fire is September 15, 2012.

Bagley Fire in California has burned over 24,000 acres and is 20% contained at this point. This wildfire was started by a lightning strike on August 18th. The fire is burning in an area containing heavy concentrations of dry timber, brush fields and steep slopes. Existing conditions along with overnight weather, increased fire activity within the perimeter. Estimated containment date is September 05, 2012.

Chips fire in California has burned over 68,000 acres. The cause of this fire is still under investigation. The fire is currently 65% contained. Containment lines held on the fire today despite winds gusting up to 35 miles per hour over the fire area. Firefighters were able to quickly identify and contain several small spot fires by the end of the day shift. Estimated containment date is August 31, 2012.

North Pass Fire has burned over 27,000 acres and is 34% contained. It was started by a lightning strike on August 18. The fire is actively burning in heavy timber moving northeast into the Yolla Bolly Middle Eel Wilderness. Extreme fire behaviors have been observed in the afternoons. This fire continues to spread to the North, South, and East. The terrain difficulty is extreme due to steep canyons and slopes. Estimated containment date is Sept. 07.

The Fort Complex Fire in northern California which was started by a lightning strike on Aug. 5 is 11,000 acres in size and only 15% contained. This fire is a complex of 3 fires in CA; the Goff Fire near Seiad, CA; the Hello & Lick Fires-2 mi. SW of Apple. Estimated containment date is Aug. 30.