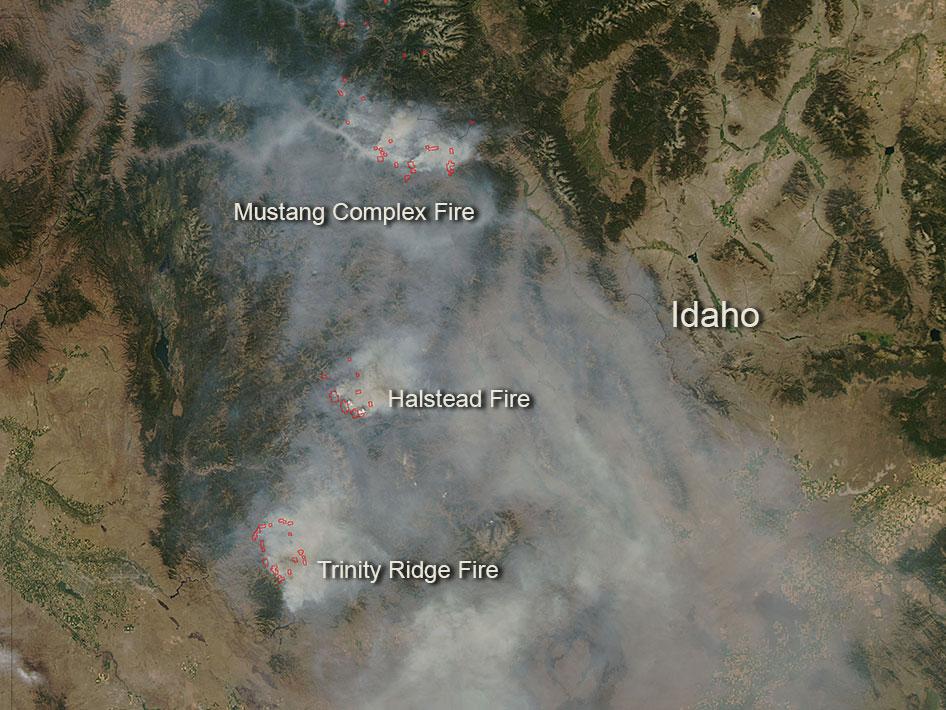 A trio of large and complex fires continues to wreak havoc in the state of Idaho. The Mustang Complex Fire which was started by a lightning strike on the weekend of July 28-29 is currently only 6% contained and over 89,000 have been affected. Five of the fires, the Mustang, Broomtail, Roan, Cayuse and East Butte have burned together. The Lost Packer Fire continues to burn and and increase in size. The potential for the growth of this fire is high and the terrain the firefighters are dealing with is considered extreme due to steep inaccessible terrain. Mustang Fire continues to burn actively along the Salmon River between Long Tom Creek and Corn Creek. Some fires are currently not staffed due to safety concerns. The current estimation for containment of the fire is September 30, 2012.

The Halstead Fire also started with a lightning strike on July 27. At this point almost 92,000 acres have been affected and this fire is only 5% contained. The fire is under a suppression strategy. Firefighters are using a variety of strategies to manage the fire, including direct attack, indirect attack and point protection. A mix of these strategies will be used to protect values in the fire's path in a combination that provides the best chance of being successful while minimizing firefighter exposure to risk. Both the growth potential of the fire and the terrain in which they are fighting this fire are extreme. The projected date for containment is October 16, 2012.

Unlike the other two fire, the Trinity Ridge Fire's cause was human in nature. This fire started on August 3 and has currently affected over 90,000 acres. It is 5% contained. Thunderstorms are expected today which may cause gusty and shifting winds around the fire. An additional helicopter from the National Guard was added yesterday to support the fire for possible medical emergencies. The fire was active to the south yesterday moving into the area of Big Trinity Campground and Green Creek to the south. Growth potential for this fire is extreme and the terrain is difficult. The projected date for contained is October 15.

This natural-color satellite image shows smoke from the fires streaming east. It was collected by the Moderate Resolution Imaging Spectroradiometer (MODIS) aboard the Aqua satellite on August 18, 2012. Actively burning areas, detected by MODIS’s thermal bands, are outlined in red.