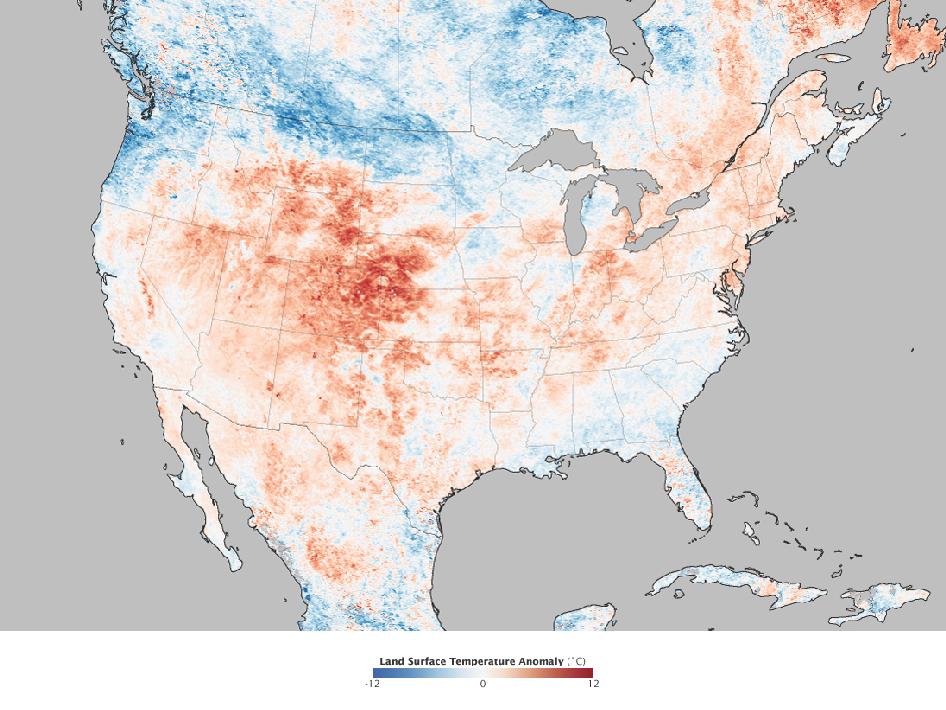 On June 28, 2012, wildfires raged across the western United States. The Waldo Canyon fire in Colorado attracted the most attention after spreading into Colorado Springs and charring hundreds of homes, but large wildfires also burned throughout Utah, Wyoming, Montana, New Mexico, and Arizona.

A lack of winter snow cover and ongoing drought primed vegetation in these states for ignition. But in recent weeks, another ingredient for extreme wildfire emerged: heat. High temperatures dry out vegetation and decrease the relative humidity, making it easier for fires to ignite and spread.

The intensity and scope of the heat wave in the western United States is visible in this map of land surface temperature anomalies for June 17–24, 2012. Based on data from the Moderate Resolution Imaging Spectroradiometer (MODIS) on NASA’s Terra satellite, the map depicts temperatures compared to the 2000–2011 average for the same eight day period in June.

Areas with warmer than average temperatures are shown in red; near-normal temperatures are white; and areas that were cooler than the 2000-2011 base period are blue. Colorado experienced the brunt of the heat wave and had eight large wildfires burning on June 28, 2012. Wyoming and Utah—other states that have seen unusually hot weather—together had nine wildfires burning.

This heat wave, like all extreme weather events, has its direct cause in a complex set of atmospheric conditions that produce short-term weather. However, weather occurs within the broader context of the climate, and there’s a high level of agreement among scientists that global warming has made it more likely that heat waves of this magnitude will occur.