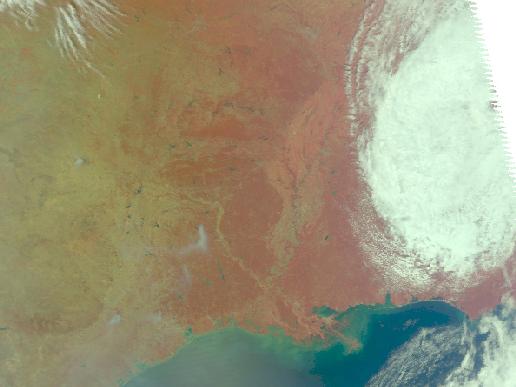 Four plumes of smoke from Texas wildfires are visible in this NASA satellite image with rainfall relief just east an out of reach.

The largest plume of smoke in the lower center part of this image is from the 536 Bear Creek Wildfire which is raging over 14,000 acres. The Bear Creek fire started on Sunday, September 4, 2011 around noon local time.

This visible image was captured by the Atmospheric Infrared Sounder (AIRS) instrument that flies aboard NASA's Aqua satellite. It was taken on Sept. 6, 2011 at 3:23 p.m. EDT. Several plumes of smoke from the fires raging in Texas as visible in the lower center and left. The rounded mass of clouds on the right side are the remnants of Tropical Storm Lee, which delivered only gusty winds to Texas and fanned the flames. Lee's rainfall remained to the east.

Inciweb is the "Incident Information System" website that reports wildfire conditions throughout the country. More information about the fires can be found on the Incident Web page: http://www.inciweb.org/unit/4502/.