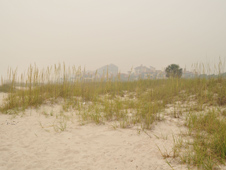 › View larger image
A thick haze of smoke can be seen in the sky over the sand dunes on Fernandina Beach. Credit: Daniel Brown, Miami, Fla. 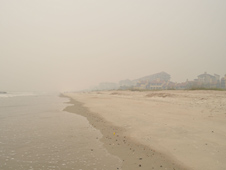 In this series of photos from Fernandina Beach, Fla. it is easy to see the brownish haze at the shoreline on June 22, 2011. The photos were taken by Daniel Brown, a Florida meteorologist at the National Hurricane Center. The series of photos were taken at about 11:45 a.m. EDT and conditions worsened throughout the day. Visibilities were down to about 1/4 to 1/2 mile.

The National Weather Service in Jacksonville, Florida issued a Dense Smoke Advisory today, June 23 that remains in effect until 4 p.m. EDT today for the Florida counties of Nassau-Brantley, Glynn, Charlton, and Camden, and including the cities of Fernandina Beach, Nahunta, Brunswick, Folkston, Woodbine, St Marys.

The National Weather Service said that smoke from the Honey Prairie Complex fire and other wildfires in southern Georgia and northern Florida are reducing visibilities to less than one half mile from the Okefenokee Swamp to Brunswick and Jekyll Island, Fla.

A lightning strike on Thursday, April 28, 2011 was the cause of the Honey Prairie Fire in the southwest portion of the Okefenokee National Wildlife Refuge. According to the U.S. Fish and Wildlife Service, all entrances into Okefenokee National Wildlife Refuge remain closed. All visitor activities are suspended until the threat of fire is over. For status updates on visitor activities contact: Okefenokee Swamp Park, 912-283-0583. Rob Gutro NASA Goddard Space Flight Center
› Back To Top