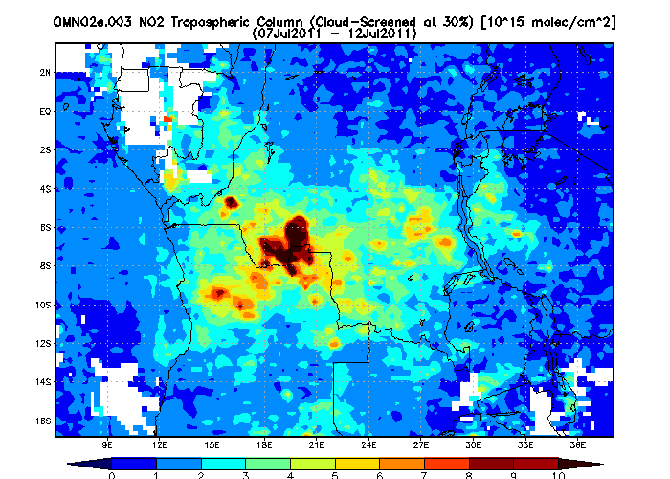 › View larger
This image from the OMI instrument on NASA's Aura satellite shows nitrogen dioxide levels from July 7 through 12, 2011 in central Africa pertaining to agricultural fires. The highest levels of NO2 appear as a dark red butterfly over the southern Democratic Republic of the Congo. The NO2 is measured by the number of molecules in a cubic centimeter. Credit: NASA/James Acker

Fires raging in central Africa are generating a high amount of pollution that is showing up in data from NASA's Aura Satellite, with the ominous shape of a dark red butterfly in the skies over southern part of the Democratic Republic of the Congo and northern Angola.

An image of the pollution from agricultural fires in central Africa was created from data of nitrogen dioxide (NO2) levels over the period from July 7 to 12, 2011. It was created from Ozone Measuring Instrument (OMI) data using the NASA Giovanni system by Dr. James Acker at NASA's Goddard Space Flight Center in Greenbelt, Md.

Each year, people in the region burn croplands to clear fields after harvests. Burning is also used to create new growth in pastures and move grazing animals to new locations.

NO2 forms during fires when nitrogen reacts with oxygen. In fact, NO2 is formed in any combustion process where the oxygen is provided by Earth's atmosphere.

Detection of NO2 is important because it reacts with sunlight to create low-level ozone or smog and poor air quality. The OMI instrument that flies aboard NASA's Aura satellite is able to detect NO2. Low-level ozone (smog) is hazardous to the health of both plants and animals, and ozone in association with particulate matter causes respiratory problems in humans.

OMI measures NO2 by the number of molecules in a cubic centimeter. The highest concentrations appear in dark red and are coming from extreme northern Angola and south central part of the Democratic Republic of the Congo. The high concentration coming from the DRC appears to look like a butterfly.