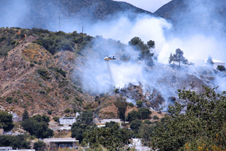 › Larger image
Images credit William Patzert, NASA JPL On May 16, 2011 a brush fire behind NASA's Jet Propulsion Laboratory (JPL) in Pasadena, Calif., burned and firefighters were able to douse it the same day. According to the Associated Press, there were no damages to buildings or any injuries reported. The fire was squelched about one and a half hours after it was sighted.

Three water-dropping helicopters aided firefighters to fight the flames, and NASA's Bill Patzert, Climate Scientist captured this image and a video of one of the helicopters making a water drop. Patzert took several photos of the smoke coming from the ridge north of the campus and said "The fire came within a 100 feet of NASA JPL buildings. Luckily the wind was blowing away from the Lab." The campus was not evacuated. Rob Gutro
NASA's Goddard Space Flight Center, Greenbelt, Md.
› Back To Top