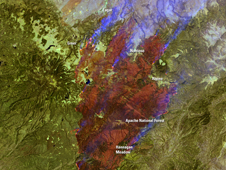 › View larger image
A Landsat image of the burning mountains in Arizona Credit: NASA/USGS The second largest fire in Arizona history, the Wallow Fire is graphically depicted by this Landsat image, taken June 7, which shows burning in the mountains of eastern Arizona near the border with New Mexico.

Starting on May 29, winds and hot, dry conditions helped the fire grow quickly, burning approximately 389,000 acres when the Landsat 7 image was acquired. The dense plume of smoke pouring north from the massive fire affected air quality as far north as Wyoming and as far east as Georgia.

In addition to imagery of natural hazard events, Landsat provides valuable data for land use research and advances the Department of the Interior’s important role in land remote sensing under the President’s National Space Policy. Landsat images are unique in that they provide complete global coverage, they are available for free, and they span nearly 40 years of continuous earth observation. No other satellite imagery has that combination of attributes.