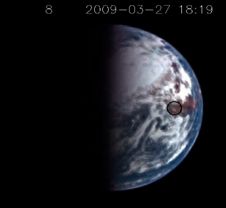 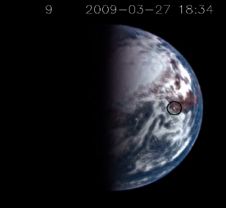 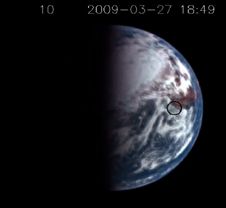 A sun glint on Earth is captured (center of the black circle) in the middle frame of this series of images taken by NASA’s Deep Impact spacecraft as it looked at the north pole. The reddish area is North America, and the glint is coming from a body of water in California. Credit: Don Lindler, Sigma Space Corporation/GSFC

› View north video
› View south video In two new videos from NASA’s Deep Impact spacecraft, bright flashes of light known as sun glints act as beacons signaling large bodies of water on Earth. These observations give scientists a way to pick out planets beyond our solar system (extrasolar planets) that are likely to have expanses of liquid, and so stand a better chance of having life.

These sun glints are like sunshine glancing off the hood of a car. We can see them reflecting off a smooth surface when we are positioned in just the right way with respect to the sun and the smooth surface. On a planetary scale, only liquids and ice can form a surface smooth enough to produce the effect—land masses are too rough—and the surface must be very large. To stand out against a background of other radiation from a planet, the reflected light must be very bright. We won’t necessarily see glints from every distant planet that has liquids or ice.

“But these sun glints are important because, if we saw an extrasolar planet which had glints that popped up periodically, we would know that we were seeing lakes, oceans or other large bodies of liquid, such as water,” says Drake Deming, of NASA’s Goddard Space Flight Center in Greenbelt, Md. Deming is the deputy principal investigator who leads the team that works on the Extrasolar Planet Observations and Characterization (EPOCh) part of Deep Impact’s extended mission, called EPOXI. “And if we found large bodies of water on a distant planet, we would become much more optimistic about finding life.”

One of EPOCh’s goals is to observe the Earth from far away—in this case, about 11 million miles away—so that we know what an Earth-like planet would look like when viewed from our spacecraft. The images in these videos were collected when the spacecraft was close enough to resolve some of Earth’s features, but at the same time, Earth could be treated as a very distant, single point. “This allows us to properly simulate what we would have observed if Earth were an extrasolar planet,” says Michael A’Hearn, principal investigator for EPOXI.

The researchers expected to see the sun glints but were surprised by the intensity and small focus of some, says Goddard’s Richard K. Barry. Glints appeared over oceans, most likely in relatively calm patches, and over a few land masses, probably caused by large inland lakes. Barry, who is leading the Earth-glint research effort, is putting together a catalog that will relate each glint to an exact location on Earth.

Together, the new videos provide the first view of Earth for a full rotation from the north pole (shown in one video) and south pole (the second video). The resolution is high enough to distinguish land masses, bodies of water and clouds. Each 16-second video is a compilation of a series of green, blue and near-infrared images taken every 15 minutes on a single day. Each is also the end product of months of planning, sophisticated data processing and analysis by the team.

The choice of infrared light, which is beyond the range of human sight, instead of visible red produces a better contrast between land and water. “People think of land as being greenish, but that’s because our eyes aren’t sensitive in the infrared,” Deming explains. “Vegetation actually shows up better in the infrared.”

Seen from very far away, Earth looks like a blue dot. “But the blue comes from Rayleigh scattering in our atmosphere rather than from the oceans,” says Nicolas Cowan, an EPOCh team member at the University of Washington. “That means that our planet appears blue even to an observer located above the North Pole, despite the fact that there isn’t always much ocean in sight. As Earth spins, different surface features rotate in and out of view, causing the color of the blue dot to change slightly from one hour to the next.”

For an observer above the pole, most of the visible part of Earth is covered in snow, ice and clouds. From far away, these appear grayish and are hard to tell apart because they are all basically water molecules in different forms. “But when a large expanse of bare land, like the Sahara Desert, rotates into view, Earth gets a bit redder because continents reflect near infrared light relatively well,” Cowan explains.

Given just this limited amount of information, the researchers could begin to describe an extrasolar planet’s surface—perhaps even infer the existence of oceans and continents.

Of course, gathering this type of information about an exoplanet is a big undertaking. Once gathered, though, such data could point scientists toward the best targets to investigate first. “This is just the first step in trying to understand the nature of the surfaces of extrasolar planets,” says A’Hearn.