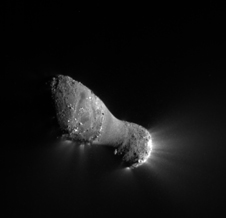 Jets can be seen streaming out of the nucleus, or main body, of comet Hartley 2 in this image from NASA's EPOXI mission. The nucleus is approximately 2 kilometers (1.2 miles) long and .4 kilometers (.25 miles) across at the narrow "neck." Credit: NASA/JPL-Caltech/UMD
› Larger image 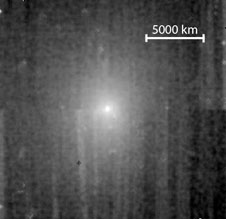 A large, diffuse cloud of CN gas surrounds the nucleus of Hartley 2 in this image from NASA's EPOXI mission. The gas forms a cloud of more than 200,000 kilometers (about 124,000 miles) in radius, compared to the comet's size of about 2 kilometers (1.24 miles). Credit: NASA/JPL-Caltech/UMD
› Larger image Hartley 2’s hyperactive state, as studied by NASA’s EPOXI mission, is detailed in a new paper published in this week’s issue of the journal Science by an international team of scientists that includes Lucy McFadden of NASA's Goddard Space Flight Center in Greenbelt, Md.

After visiting a comet and imaging distant stars for hints of extrasolar planets, you could say the spacecraft used for EPOXI had seen its fair share of celestial wonders. But after about 3.2 billion miles (5.1 billion kilometers) of deep space travel, one final wonder awaited the mission's project and science teams. On Nov. 4, 2010, the EPOXI mission spacecraft flew past a weird little comet called Hartley 2.

"From all the imaging we took during approach, we knew the comet was a little skittish even before flyby," said EPOXI Project Manager Tim Larson of NASA's Jet Propulsion Laboratory in Pasadena, Calif. "It was moving around the sky like a knuckleball and gave my navigators fits, and these new results show this little comet is downright hyperactive."

"Hartley 2 is a hyperactive little comet, spewing out more water than most other comets its size,” said Mike A'Hearn, principal investigator of EPOXI from the University of Maryland, College Park. "When warmed by the sun, dry ice -- frozen carbon dioxide -- deep in the comet's body turns to gas jetting off the comet and dragging water ice with it."

Although Hartley 2 is the only such hyperactive comet visited by a spacecraft, scientists know of at least a dozen other comets that also are relatively high in activity for their size and which are probably driven by carbon dioxide or carbon monoxide.

"These could represent a separate class of hyperactive comets," said A'Hearn. "Or they could be a continuum in comet activity extending from Hartley 2-like comets all the way to the much less active, "normal" comets that we are more used to seeing."

The study provides several new twists in the unfolding story of this small cometary dynamo, including: (1) the smooth, relatively inactive waist of the peanut-shaped comet is likely re-deposited rather than primordial material; (2) Hartley 2 has an ‘excited state of rotation’ because it spins around one axis, but also tumbles around a different axis; and (3) on its larger, rougher ends, the comet's surface is dotted with glittering, blocky objects that can reach approximately 165 feet (50 meters) high and 260 feet (80 meters) wide.

Another mission discovery is that on the knobby ends of Hartley 2, particularly the smaller end, the surface terrain is dotted with block-like, shiny objects, some as big as one block long and 16 stories tall. These objects appear to be two to three times more reflective than the surface average.

An added surprise was a pronounced increase in the amount of CN gas in the comet's coma. For nine days in September, about 10 million times more CN gas was given off than usual. This dramatic and unexpected change, called the "CN anomaly," was analyzed by McFadden and Dennis Bodewits, a former postdoctoral fellow at NASA Goddard who is now at the University of Maryland, and their colleagues.

The amount of CN in a comet's coma is thought to hold clues to how comets formed and evolved during their lifetime. In other cases where a comet has had a big outburst, a lot of dust has been released at the same time. But in this case, the amount of dust did not change, yet the CN gas abundance exploded.

"We aren't sure why this dramatic change happened," says McFadden. "We know that Hartley 2 gives off considerably more CN gas than comet Tempel 1, which was studied earlier by a probe released by the Deep Impact spacecraft. But we don't know why Hartley 2 has more CN, and we don't know why the amount coming off the comet changed so drastically for a short period of time. We’ve never seen anything like this before."

EPOXI was an extended mission that utilized the already "in-flight" Deep Impact spacecraft to explore distinct celestial targets of opportunity. The name EPOXI itself is a combination of the names for the two extended mission components: the extrasolar planet observations, called Extrasolar Planet Observations and Characterization (EPOCh), and the flyby of comet Hartley 2, called the Deep Impact Extended Investigation (DIXI). The spacecraft retained the name "Deep Impact." During its approach, encounter and departure from comet Hartley 2, the spacecraft beamed back over 117,000 images and spectra.