At the Heart of Hartley-2, a New Breed of Comet? 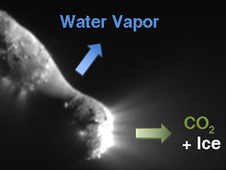 Jets spew out ice and carbon dioxide from one end of comet Hartley-2 in this EPOXI image, while water vapor gets released from the middle region. The differences suggest that the comet's core is made of at least two different ices. Ground-based measurements suggest the presence of a third ice. Credit: NASA/JPL-Caltech/UMD
› Slightly larger image At the heart of every comet lies a remnant of the dawn of the solar system. Or is that remnants? Astronomers don't know, but the answer would give them a clearer picture of exactly how comets were born eons ago at the birth of the Solar System. Did thin tendrils of dust and ice get drawn slowly inward and pack themselves into a single, uniform mass? Or did a hodge-podge of mini-comets come together to form the core for a comet of substance?

For Hartley-2, the answer so far is neither. "We haven't seen a comet like this before," says Michael Mumma of NASA's Goddard Space Flight Center in Greenbelt, Md. "Hartley-2 could be the first of a new breed."

Both data collected by Mumma's team and detailed images of the comet taken by NASA's EPOXI mission reveal that the comet's core is not uniform. "We have evidence of two different kinds of ice in the core, possibly three," says Mumma. "But we can also see that the comet's overall composition is very consistent. So, something subtle is happening. We're not sure what that is."

The researchers observed Hartley-2 six times during the summer, fall and winter of 2010, both before and after the EPOXI mission's Deep Impact spacecraft had its November rendezvous with the comet. Using telescopes perched high in the mountains of Hawaii and Chile, Mumma's team studied the comet's coma—the aura of gas, dust and ice particles that surround the core. The findings of Mumma and his colleagues at Catholic University of America in Washington, D.C., the University of Missouri in St. Louis, the University of Hawaii in Honolulu, the California Institute of Technology in Pasadena, the Max Planck Institute for Solar System Research in Katlenburg-Lindau, Germany, and Rowan University in Glassboro, N.J., are being reported in a special issue of Astrophysical Journal Letters on May 16, 2011

The gases and rocky particles that make up the coma are the clues that astronomers use to deduce what the core is made of, and thus its origin. To see which types of molecules are there, researchers check for telltale signatures in the near-infrared region of light, at wavelengths from 2.9 to 3.8 micrometers. In this way, it's also possible to tell how plentiful each type of molecule is.

Ices in Hartley-2 are mostly made of water, along with traces of many other types of molecules, the team learned. This is in addition to the plentiful carbon dioxide detected in the comet in 1997 by the European Space Agency’s Infrared Space Observatory. Mumma and colleagues paid close attention to the levels of water and seven other molecules that evaporate easily. The molecules remain frozen either on or below the core’s surface until the warming rays of the sun vaporize them; then, they are swept into the coma.

The release of the molecules depends a great deal on exposure to the sun. The researchers knew that in 2009 ground-based observers had detected telltale signs that the core was rotating quickly. So the team was interested in what would happen to the production levels of these molecules as the comet rotated every 18 hours, giving each of its faces a turn to bathe in sunlight. Turns out, they saw something that nobody has seen before.

First of all, they saw the comet's wild side. "The amount of water changed dramatically night by night and even within a single night—in some cases, doubling in that time," says Mumma. But, in truth, Hartley-2 isn't the only comet to get caught being fickle.

This result is important for astronomers, he notes, because they often study the gases in a comet's coma one at a time. "But this suggests that if you look at one gas on one night and another the next night, the production rates might change quite a bit. The findings could be different than if you measured the two gases together," he says. "And in the worst case, you could get the wrong idea about the composition of the comet."

Beyond that, Mumma says, "this tells us that the overall composition of the gas in the coma did not change." Taken by itself, this might seem to imply that the core of the comet is uniform. But when the findings of the EPOXI science team are considered, the picture gets more complicated.

"The fact that the gases all vary together is somewhat puzzling, because EPOXI found a large variation in the release of carbon dioxide relative to water," says the head of the EPOXI science team, Michael A'Hearn of the University of Maryland. "At this point the interpretation is pretty speculative."

EPOXI's Deep Impact spacecraft had a rendezvous with the comet in November 2010. The rich images taken then of the comet's surface revealed small, volcano-like "jets" spewing out carbon dioxide gas and water ice at one end. The jets activate when sunlight warms that end of the comet, turning the frozen carbon dioxide (aka dry ice) below the surface into gas that escapes through open holes.

Researchers had never seen this before. "In other comets that have been visited, most of the water appears to be converted into gas below or at the surface," says A'Hearn. "We have not seen icy grains, or at least, very few, being dragged into the coma."

But the whole core is not made the same way. EPOXI revealed that the carbon dioxide jets are not found at the large end of the comet, and in the middle region, water vapor is released without any carbon dioxide. "So clearly, when we look at the comet up close, the composition of the core changes from one region to another," Mumma says.

Mumma's team found more evidence that Hartley-2's core is not uniform. They did so by looking carefully at four types of gas to see in which directions their molecules traveled after release. They saw that water and another gas, methanol, came off the comet in all directions. "Because they are found together, we infer that they come from the same chunks of ice," he explains.

"So, we have water ice with methanol in it, and we have carbon dioxide ice. Both are in the comet's core," Mumma says. "We may also have a third type of ice, made from ethane."

That possibility is based on the fact that ethane, unlike water and methanol, was released strongly in one direction. "This is actually rather profound," says Mumma. "It suggests that some molecules, such as methanol, may be mixed with water, while others, such as ethane, are not. This isn't the way we've thought of comets, before now."

More research needs to be done, and whether all comets behave like Hartley-2 isn't known, Mumma adds. "But now that we know what this one does, we have a baseline to compare other comets against." Elizabeth Zubritsky
NASA's Goddard Space Flight Center, Greenbelt, Md.
Find this article at:http://www.nasa.gov/mission_pages/epoxi/hartley-2.html